Luke Saville "got one back" on Jarmere Jenkins at the Latrobe City Traralgon ATP Challenger on a day where five Aussies made the quarterfinals. 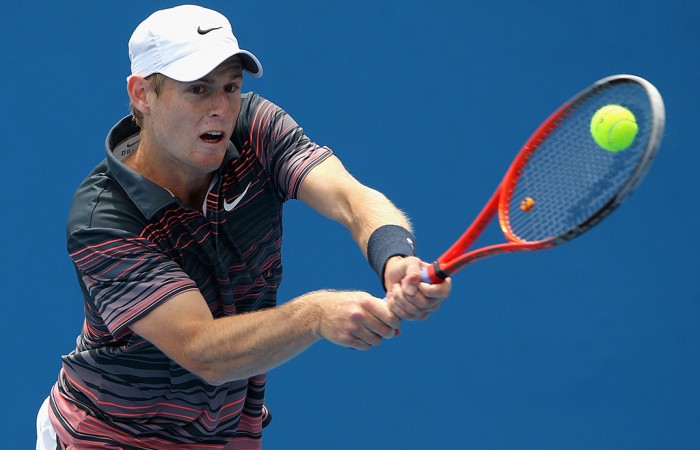 Luke Saville has led a group of five Australians into the quarterfinals of the second 2014 Latrobe City Traralgon ATP Challenger with a solid win over last week’s finalist, Jarmere Jenkins.

The American has had the wood over Saville in recent times, including a straight sets victory in the Toowomba final last month.

“He’s had my number over the last six months or so, he’s beaten me twice,” said Saville. “But I knew what I had to do today and I executed it well.

Saville was able to comfortably secure the win in just over an hour, 6-3 6-3, the sixth seed now ensuring his appearance in consecutive quarterfinals in Traralgon this year.

In only his second tournament back from injury, the twenty-year-old South Australian feels he is on the improve.

“I’m striking the ball better, and my match awareness is coming back,” he said.

“I still focus on rehab every day, but the injury is definitely behind me.”

A regular in Traralgon, Saville is once again enjoying his time in the town and says the often-windy conditions suit him and his game.

“I’ve had very solid results here, three finals,” he said. “I’m a country boy myself and I love coming back.

“It’s nice to be here for two straight weeks.”

“If I play to my strengths, hopefully I can get the win,” Saville said.

On paper, the match looked like it would be a tight one, with the players sitting side-by-side on the ATP rankings at 202 and 203 respectively.

“We joked about that yesterday,” said Smith. “I’m on top and he told me that old age comes first.”

Smith, who qualified for ATP Tour events in Indian Wells and Atlanta this year, said that the score line in their encounter was misleading.

“It probably doesn’t reflect how tough it was out there,” he observed.

Fifth seed Thanasi Kokkinakis also moved through on Thursday with a 6-1 6-4 win over Victorian wildcard Omar Jasika. The 18-year-old South Australian now faces second seed James Ward from Great Britain who was a set ahead of Jordan Thompson when the Sydneysider was forced to retire with dizziness.

John Millman also advanced to the quarterfinals courtesy of a retirement after China’s Yan Bai was unable to continue due a back injury.

Quarterfinals get underway at Traralgon on Friday from 11am.