Sam Stosur, Nick Kyrgios, Casey Dellacqua and Matt Ebden will all take to the courts at Flushing Meadows on Thursday for the second round of the US Open. 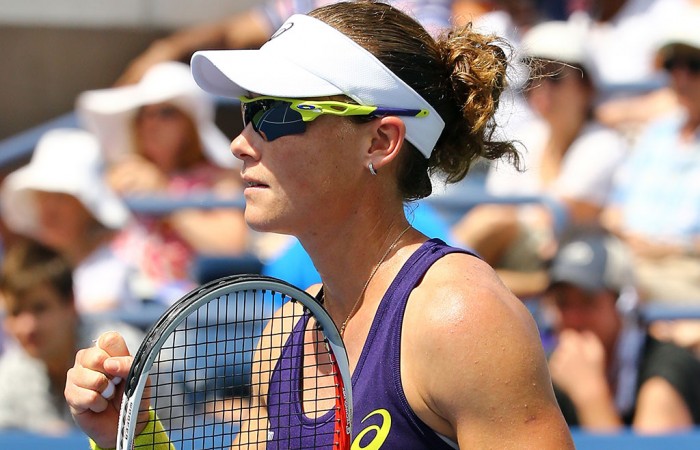 Kyrgios will look to continue his impressive run in New York, which began with a four-set upset win over 21st seed Mikhail Youzhny. He’ll need to be ready for a gritty battle from the baseline in round two, with Seppi one of the fittest and most consistent players in the game. The Italian famously ousted Lleyton Hewitt in five sets on Rod Laver Arena in sapping heat earlier this season, and although he’s down to 49th in the rankings, he swatted aside Sergiy Stakhovsky for the loss of just eight games in the first round at Flushing Meadows. It will be a tough match for the 19-year-old Aussie, but provided his forearm soreness does not restrict him, he will prove a handful for the former world No.18.

Ebden scored a confidence-boosting win in the opening round over Tobias Kamke, but did complain of hip soreness in the third set of that victory, which forced him to keep points short. He’ll need to be physically fresh against Mayer, a 27-year-old Argentine who has surged from No.98 to No.26 in the rankings this season after winning in Hamburg and reaching the fourth round at Wimbledon. But while Mayer has enjoyed plenty of recent success, little of it has come on North American hard courts. He played just on US Open tune-up event – an opening-match loss in Winston-Salem – and reached the second round in New York via retirement. If Ebden is going to score an upset anywhere, it will be on the quick Flushing Meadows hard courts on which he thrives.

Kanepi is a tough match-up for Stosur – a tall, powerful, flat-hitting foe, the type of opponent against which Stosur has historically struggled. Yet while the Estonian is a former world No.15 and a five-time Grand Slam quarterfinalist – including at the US Open in 2010 – she has slipped to 50th in the rankings, having won only a few more matches than what she’s lost in 2014. Stosur, meanwhile, is heading in the opposite direction – having teamed with new coach Simon Rea, she’s rediscovered her form and is flourishing on hard courts, jumping from 25th to 21st in the rankings after reaching last week’s New Haven semis and trouncing Lauren Davis in the first round on Tuesday. The pair have split their two career meetings.

“Absolutely zero” was Dellacqua’s response when asked how much knew about her second-round opponent at the US Open. The Chinese player, ranked 139th, has played principally on the ITF circuit in 2014, going 30-8. She has maintained that winning feeling in New York, winning three matches in qualifying and scoring her fourth in a row with a crushing win over Paula Kania of Poland in round one. Yet although Dellacqua may not have seen her play, the Australian can be confident in her own level of play – seeded for the first time at a major, she opened her tournament with a straight-sets win and stands on the cusp of her best ever finish in New York. With motivation high and form strong, the West Australian will look to continue her late-career renaissance.