With six Australian men now ranked inside the world's top 100, it represents the nation's best showing in this elite bracket in more than 13 years. 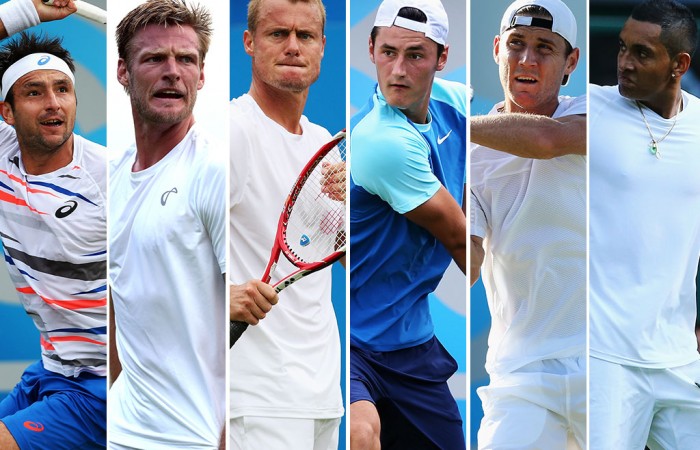 Australia’s flourishing contingent of male talent is evoking memories of the nation’s glory days of the late 1990s and early 2000s.

With Bernard Tomic’s return to the top 100 following his victory at the ATP event in Bogota, Colombia, Australia now has six representatives in the top 100.

This is Australia’s best showing in more than 13 years; the last time six Aussie men ranked inside this elite bracket came all the way back on 4 June 2001.

The year 2001 was a magnificent one for Australian tennis. Rafter reached the Wimbledon final while Hewitt won the US Open and finished the year at No.1. Late in the season, both Hewitt and Rafter ranked inside the top four.

It also came in the midst of a period of Australian Davis Cup dominance – from 1999 to 2003, Australia reached four finals, and twice won the cup.

Todd Woodbridge, part of those winning Davis Cup squads of 1999 and 2003, says the current group of Aussies inside the top 100 is generally younger and still developing.

“Back then (in 2001) you had three class players (Hewitt, Rafter and Philippoussis) who were all Slam winners or finalists. But I think we’ve now got a group of players who can also get into the top 20. You look at Tomic, Kyrgios and the potential for the couple of others to possibly join them,” he observed.

This group is starting to make its mark on the tour, much like their predecessors.

With Hewitt’s victory at Newport followed by Tomic’s win in Bogota, it marked the first time since 2000 – when Hewitt triumphed at Queen’s and then Rafter in ‘s-Hertogenbosch – that two different Australians had won back-to-back ATP titles.

Add to this Groth’s stunning improvement to become one of the game’s newest top 100 fixtures, Matosevic’s gains in recording his first two Grand Slam match wins in Paris and London, and, most notably, teenage Kyrgios’ breakthrough result at Wimbledon, and Australia’s tennis stocks appear extremely healthy.

“It’s an indication of the work that’s been put in over last several years from when Craig Tiley first came into player development. The processes and the programs that were put in place are now starting to develop the players that everyone’s been looking for,” Woodbridge said.

“For so long we’ve been saying ‘be patient, it’s a long-term plan’, and now we’re reaching that point where players are transitioning from good juniors to seniors and they still need our support and guidance.”

It certainly bodes well ahead of the upcoming US Open.

With five players guaranteed direct entry, a reciprocal main draw wildcard at its disposal plus the possibility of another group of up-and-coming players – including Luke Saville, James Duckworth, Thanasi Kokkinakis, Ben Mitchell and Alex Bolt – coming through qualifying, Australia could find itself in a similar situation to the one it enjoyed at Wimbledon.

There, eight Aussies lined up in the main draw to give the nation its biggest men’s representation at the Championships since 2000.

And then there is the Davis Cup.

Australia faces a play-off tie against Uzbekistan on grass at Cottesloe in September, with motivation extremely high to cement a spot in the World Group for the second straight year.

“It pushes everybody to perform and train harder and be positive, and if something happens to one of our singles or doubles players, we now have options (to replace them).

“We couldn’t have asked for a better scenario at this point.”