Ashleigh Barty and John Peers are the first Australians into the second round of the mixed doubles after they defeated compatriots Olivia Rogowska and JP Smith 6-3 6-4. Jarmila Gajdosova also advanced in her women's doubles encounter. 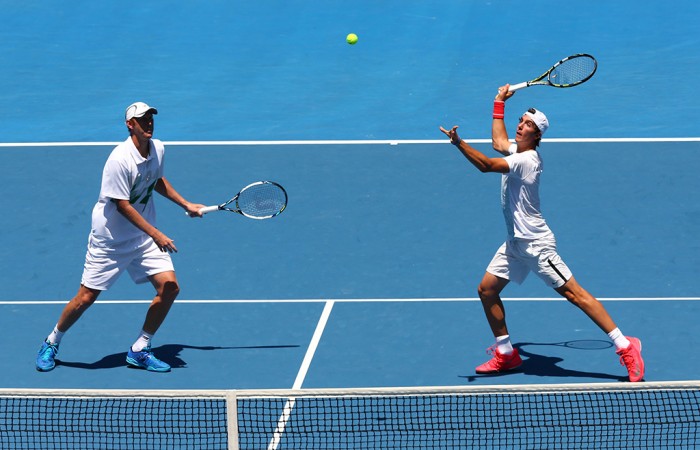 Three Aussies tasted success in the doubles on an action-packed Day 5 of the 2014 Australian Open.

Ashleigh Barty and John Peers were the first Australians into the second round of the mixed doubles after they defeated compatriots Olivia Rogowska and JP Smith 6-3 6-4.

Australia’s Jarmila Gajdosova advanced to the second round of the women’s doubles when she teamed up with Croatian Ajla Tomljanovic to defeat fellow Aussie Anastasia Rodionova and Russian Alla Kudryavtseva 1-6 6-4 7-5 in a match that lasted just under two hours.

The exciting pairing of Chris Guccione and Thanasi Kokkinakis did their utmost to topple the fourth seeds, Ivan Dodig of Croatia and Marcelo Melo of Brazil. Unfortunately they couldn’t quite get over the line, going down 7-5 7-6 (5).

The second Australian pairing to bow out was Naiktha Bains and Olivia Tjandramulia They met the very accomplished fourteenth seeded pairing of Barbora Zahlavova Strycova from the Czech Republic and Julia Goerges from Germany. Zahlavova Strycova and Goerges were too good for the Australian duo, winning 6-3 6-3.

Matthew Ebden and James Duckworth fought out a tough three-setter against the third seeded Spanish pairing of Fernando Verdasco and David Marrero eventually losing the match 3-6 6-3 6-2.

Jordan Thompson and Ben Mitchell were also unsuccessful in their bid to reach the men’s doubles third round. They went down to the fourteenth seeds, Lukasz Kubot of Poland and Robert Lindstedt of Sweden 6-1 6-3.

Australia’s newest favourite son Nick Kyrgios and Arina Rodionova were the last pairing on court and were defeated seventh seeds Kveta Peschke from the Czech Republic and Marcin Matkowski from Poland 7-5 6-4.