Samantha Stosur will play a rematch of her upcoming Hobart International semifinal in the first round of the Australian Open after being drawn to play Czech Klara Zakopalova. 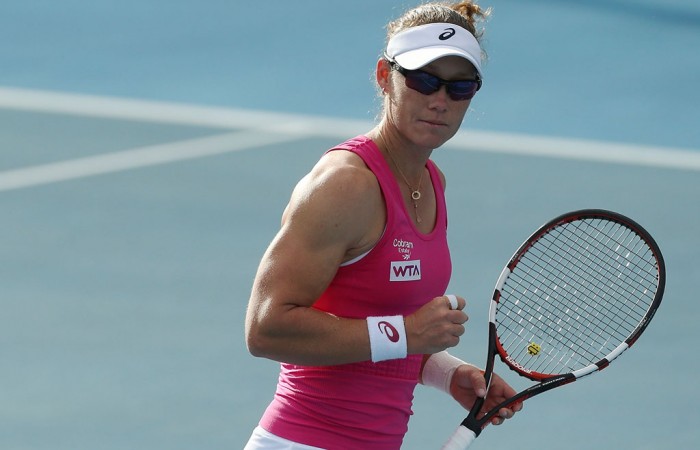 Samantha Stosur will play a rematch of her upcoming Hobart International semifinal in the first round of the Australian Open after being drawn to play Czech Klara Zakopalova. Stosur, who is the 17th seed for the event has a good record against Zakopalova winning three of their four encounters.

Casey Dellacqua, who was present at the draw, said it would be a good opportunity for Stosur.

“It’s a good match-up for Sam. I think she has played her quite a few times and gone well. They play each other today and I guess they’ll take a lot from that match into the first round here.”

Bernard Tomic and Ashleigh Barty will face a baptism of fire in their first round matches after both drawing their respective No.1 seeds. Tomic will face Rafael Nadal in his first match while Barty comes up against five-time Australian Open Champion Serena Williams.

Boris Becker, former world No.1 and current coach of Novak Djokovic said the match between Nadal and Tomic will be a must see.

“I think it’s safe to say it will be a night match. It will be exciting; everyone will be glued to their televisions.”

Lleyton Hewitt will face off against Italian 24th seed Andreas Seppi which may well be considered a reasonable draw for him considering his history of drawing big names early in the tournament in previous years.

Aussie wildcard James Duckworth is another who was not served too well by the draw and he will meet the great Roger Federer in his opening match.

Dellacqua will play former world No.2 Vera Zvonareva who did not play a single match in 2013 due to a shoulder injury and subsequent surgery.

“She hasn’t played a lot of tennis in the last year and a half, but that doesn’t mean it will be an easy match, she is definitely a quality opponent.” Dellacqua said at the draw.

“I think I played her once, quite a few years back which is probably when she was right at the top of her game, but hopefully I get the opportunity to play a few more matches.”

In all, Australia will have 15 representatives in the first round of singles, barring any coming through qualifying.

Marinko Matosevic, who was a revelation in Sydney this week, will play Japan’s 16th seed Kei Nishikori which should provide and entertaining first round spectacle.

Promising 18-year-old Nick Kyrgios has drawn German world No.81 Benjamin Becker. Jordan Thompson, who received a late call-up to the AAMI Classic at Kooyong this week, will meet Canadian No.20 seed Jerzy Janowicz.