Matosevic, Duckworth one win away 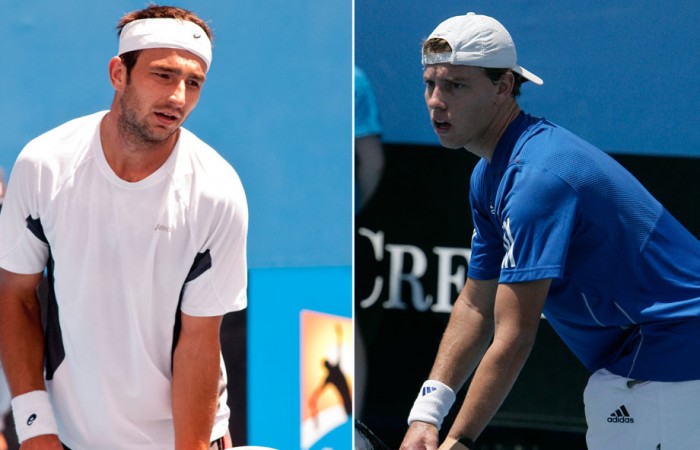 First-up, fellow New South Welshmen Greg Jones and James Duckworth have world rankings of 196 and 274 respectively and have both been enjoying some success on tour in 2011. Nineteen-year-old Duckworth had a breakout year honing his skills on clay while Jones has arguably enjoyed his best year since turning pro.

Meanwhile, the second semifinal featured Marinko Matosevic, who was the winner of this event last year and, despite not having played since the Shanghai Masters, has looked pretty solid all week. His opponent today, Michael Look, took out dark horse John-Patrick Smith in a thrilling third-set tiebreaker in the quarterfinals and came in full of confidence.

As it turned out, the matches went the full distance and, perhaps due to the muggy, swirling conditions out on court, both saw big momentum swings throughout.

In the end, it was James Duckworth who was victorious over top-seeded Greg Jones, coming from a set down to win 5-7 6-2 6-4.

In the other semifinal, Matosevic eventually ran over a tiring Look after also dropping the first set, 4-6 6-3 6-0.

The first match highlighted a contrast in styles. Duckworth, perhaps influenced by his season on clay, prefers heavy topspin off both sides and quick movement around the back of the court, while the 22-year-old Jones hits big, flat groundstrokes and makes good use of his solid game at net.

Both players opened the match strong, with games remaining on serve to 3-3 as they tested each other out. Jones was the first to blink though, and in the seventh game, Duckworth raced to two break points, helped out by some sloppy errors off the Jones racket. To his credit, Jones was able to wrest the game back to deuce, but with Duckworth displaying some clay courter’s persistence, he forced more errors, and was eventually presented with the break courtesy of a double fault.

But that just seemed to spark Jones into action. Now 4-3 down, he came back on court a different man and immediately went to work on Duckworth, getting the upper hand early in rallies, pinning his man behind the baseline, and taking advantage of some impressive net coverage. Not only was Jones able to break back but he continued right on with it for the next four games straight, taking out the first set 7-5, closing it with an ace.

Matters evened out once again in the second set with both players holding their opening two serves. Then it was Duckworth who grabbed the momentum. He managed to prise two break points from Jones and for the second time in the match was given the break via a double fault from his opponent.

Jones was clearly unhappy with an earlier call from the chair and it seemed to have a lasting impact on him as Duckworth cruised through the set without dropping another game.  Jones looked all at sea as he gave away the set 6-2 with yet another double fault.

With Jones continuing to unravel into the third set, Duckworth took an early break and soon led 4-2. He seemed the steadier man in the heat and with more margin for error on his ground strokes, seemed less prone to make a mistake.  At this critical stage of the match, it was now up to the top seed Jones to dig deep and regroup or his week looked over. Taking Duckworth to deuce on the next service game, Jones did manage to find something and with some scintillating shot making, he successfully broke and then consolidated with an easy hold to square thing up at 4-4.

A few cracks looked like they might just be starting to appear in the Duckworth game right at the finish line, but he stuck to his guns and held serve to find himself one game away from a finals berth at 5-4.

Duckworth went on to provide the crowd with some spectacular tennis to reach match point against the Jones serve. He picked up a wicked drop shot and sent it for a crosscourt winner and then followed that up with a brilliant wide lunge a few points later. On match point itself, Duckworth flicked a lob over the advancing Jones, which on first glance looked like it was going long, but the wind held it up and as it dropped into play, Jones realised all too late. Despite scrambling back, he was unable to put it back into play, leaving Duckworth to celebrate a well-deserved victory.

After the match, Duckworth recognised the difficult conditions. “It’s tough in the wind,” he said. “But I knew if I hung in there I would get my chances and luckily, I was able to take them.”

Over on Court 7, Michael Look had begun well against Marinko Matosevic and an early break was the difference in the first set as both men fought the increasingly gusty conditions. However, serving for the set at 5-3, Look dumped a couple of easy balls into the net and found himself down consecutive break points. Matosevic capitalised and put himself back in the set 5-4. But in an increasing trend in this match, he was unable to consolidate and gave the set to Look 6-4.

Once again today, we witnessed a huge momentum swing into the second set and in no time at all, Matosevic had carved out a 4-0 lead. With the wind now playing havoc and errors increasing on both sides of the net, he seemed to have the upper hand with his heavier ball striking. His increasing fury at the line calls and an apparent issue with the integrity of the net was also growing – almost in parallel with the storm clouds to the west.

It’s easy to believe that Matosevic thrives on these minor courtside niggles and that they somehow keep him grounded. It wasn’t bothering the even-tempered Look though, and as a sideshow for the spectator, it was even mildly entertaining.

Back to the tennis, and after Look held – still 4-1 down though – we saw a series of four consecutive service breaks, largely due to some inconsistent tennis from both players. At the wash up, Matosevic had levelled proceedings, taking the second 6-3.

The third set saw Matosevic simply run away with the match against an energy-sapped Look. Helped by a badly timed double fault giving him the first break, he never looked back and wrapped up the final set 6-0 in very short order.

“It feels good to win today, especially in the conditions,” Matosevic said immediately after coming off the court.

“[This event] is great preparation for me. I feel at home here … definitely.”

Tomorrow’s men’s final will follow the completion of the women’s final, which begins at 11:00 am. Both finals will be streamed live on tennis.com.au.