Millman, Jones only Australians through

John Millman and Greg Jones are the only Australians through to the second round of qualifying after a long, rain-affected day, in which many games went late into the night. 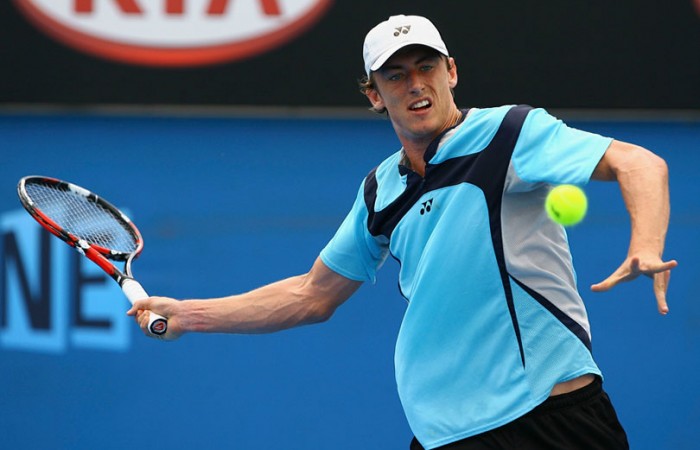 John Millman and Greg Jones are the only Australians through to the second round of qualifying after a long, rain-affected day, in which many games went late into the night.

Millman’s low unforced error count and excellent court coverage propelled him to a 3-6 7-5 6-4 win, even more impressive as the German was serving for the match at 6-3 5-3 before play was suspended due to rain.

Millman came back after the break a different player, winning the next four games to take the set and consolidated with an early break in the deciding set, however Rieschiek aided his demise with countless errors.

Clearly frustrated, he slowed down the pace of his shots in an effort to hit the ball in, but was unable to break the reliable and determined Millman.

Millman was all smiles after the match.

“Before the rain break Sebastian was playing really good tennis, but you never lose faith and never lose hope,” he told reporters after the match.

“I went to the cafe, relaxed with my mates who are down from Brisbane, got mentally focused, and I was glad I managed to fight it out.”

The only other Australian winner was Greg Jones, who outlasted Olivier Patience 4-6 6-4 9-7 last night, Jones’s determination and fitness the deciding factor in the lengthy final set.

A Wimbledon junior finalist last year, Mitchell handled the step up to the ATP tour, controlling the power of the world No.100 as well as creating angle off his powerful forehand.

Matt Reid was involved in the tightest contest of the other Aussies, winning the second set before succumbing to lanky South African Izak Van Der Merwe 6-3 6-7(7) 6-4.

The only other Australian to win a set was young New South Welshmen James Duckworth, who faded late in the match to hand victory to his opponent Tim Smyczek, 6-3 6-7(3) 6-2.

The day did not start promisingly when Maverick Banes took only three games off experienced German Simon Stadler.

Seventeen-year-old Banes, runner up in the 2010 Optus 18s Australian Championships, did not have the power to match Stadler, succumbing 6-1 6-2.

Elsewhere, it was a similar story.

Mahut’s game was too heavy for the 16 year old, however, he will no doubt take a lot out of playing a former top-50 player.

Banes’s conqueror in the Optus 18s, Sean Berman, was competitive in his 6-4 6-1 loss to Frenchman Florian Reynet.

The feisty redhead battled hard in the first set, however, a dispute with the umpire about a line call when games were on serve at 5-4 resulted in a loss in concentration that he never recovered from.

Sam Groth threatened earlier in the week he would dye his mohawk blue if he made the first round of the Australian Open.

Sadly, his hair will remain a natural colour after his loss to another Frenchman, Laurent Rochette, 6-3 7-5.

The men will play the second round of qualifying today, and the women will take to the court for their first round.

Entry is free for spectators at Melbourne Park for the qualifying rounds.