Australian Ajla Tomljanovic has scored a three-set victory against France's Alize Cornet in the fourth round at Wimbledon 2022. 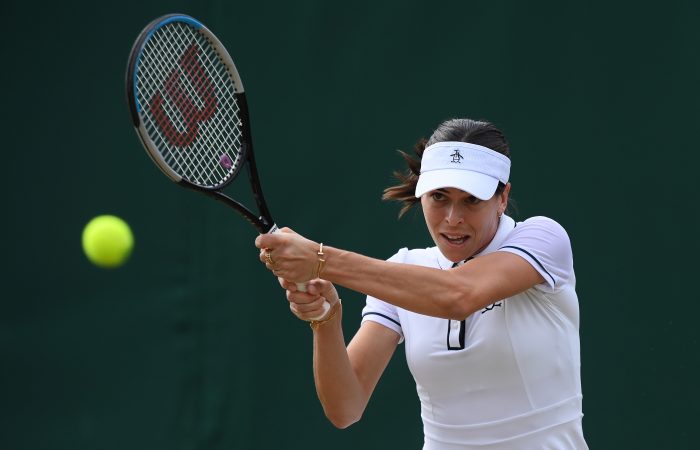 The world No.44 continued her impressive march in the ladies’ singles draw, scoring a hard-fought 4-6 6-4 6-3 victory against France’s Alize Cornet in fourth-round action today.

An emotional Tomljanovic fought back tears after the match, revealing in her on-court interview “I didn’t really think I could do it”.

“I have such great memories from last year (reaching her first Grand Slam quarterfinal) and in a way, I look back at that week a year ago and I don’t think I enjoyed it as much as I should have,” she said.

“After some tough moments this year, I wondered if I was ever going to get a chance again? I can’t believe a year later, I’m in the same position.”

Cornet, contesting a record-equaling 62nd consecutive Grand Slam main draw, started strongly. Demonstrating the all-court craft and spirited play that helped her end the 37-match winning streak of world No.1 Iga Swiatek in the previous round, world No.37 Cornet quickly took control of the match.

“Her level was really high from the get-go. I think the second point of the first game was so long that I kind of thought to myself, ‘Oh, my God, I don’t know if I’m going to physically be able to keep up with her’,” Tomljanovic said.

Yet Tomljanovic refused to give in and with absorbing rallies dominating the match, Tomljanovic began to wrest back some ascendancy.

As a physically ailing Cornet faded, Tomljanovic raced to a 5-2 lead in the deciding set.

The Frenchwoman kept fighting, breaking Tomljanovic’s serve in the eighth game to keep her hopes alive. But Tomljanovic calmly responded to break Cornet’s serve in the following game and close out victory after two hours and 34 minutes on court.

“I know she never goes away, she doesn’t give up until the last point,” Tomljanovic said of Cornet. “It’s very tough to play against players like that.

“But I found a way. I thought it was high level from both for three sets. I’m really happy to be through.”

Tomljanovic joins exclusive company as one of only nine Australians to reach multiple Wimbledon ladies’ singles quarterfinals in the Open era.

The 29-year-old Aussie also becomes the first since Jelena Dokic in 2000 to reach back-to-back quarterfinals.

Tomljanovic now faces world No.23 Elena Rybakina of Kazakhstan in the quarterfinals.

The 17th-seeded Rybakina won their only previous meeting, in the Madrid opening round last year.

“After last year facing Ash (Barty), I think I can face anyone,” Tomljanovic said. “Hopefully it’s going to be more of a contest. What I’ve learnt from last year is I have to bounce back really quickly, forget about the positive emotions and just focus on the next match.”