Defending champion Alex de Minaur is through to the quarterfinals at an ATP 250 tournament at Eastbourne. 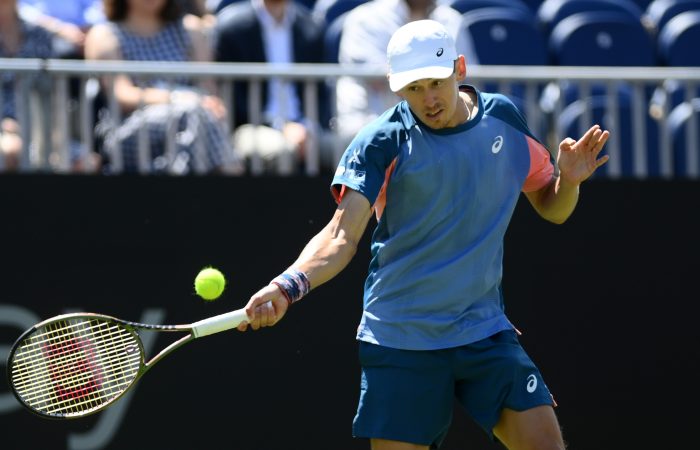 Alex de Minaur has powered into the quarterfinals at an ATP 250 tournament at Eastbourne for the second year in a row.

The defending champion scored a 7-6(3) 6-2 second-round victory against world No.32 Lorenzo Sonego in a rematch of last year’s final.

It is world No.24 De Minaur’s sixth consecutive win at the grass-court event, which includes his 2021 title-winning effort.

De Minaur, who won 81 per cent of first service points in the 93-minute encounter, now faces American Tommy Paul in the final eight.

John Millman bowed out in other second-round action, with Kazakhstan’s Alexander Bublik scoring a 6-4 6-2 victory in their clash.

In doubles, Australian Luke Saville and Dutch partner Matwe Middelkoop booked their place in the semifinals with a 4-6 6-4 [10-3] victory against Kazakhstan’s Aleksandr Nedovyesov and Pakistan’s Aisam-ul-Haq Qureshi.

It is world No.72 Saville’s second tour-level semifinal of the season and first since February.

Nick Kyrgios has withdrawn from an ATP 250 tournament at Mallorca, citing an abdominal injury as the reason.

The world No.45 had been set to face fifth-seeded Roberto Bautista Agut in the second round.

“I have been playing a lot of great matches lately and unfortunately I woke up with a pain in my abs,” Kyrgios said.

“I went to see the tournament doctor right away and he advised I don’t play … I will follow his advice as I don’t want to risk Wimbledon next week.”

This leaves Matt Ebden as the last remaining Australian at the tournament.

Ebden has advanced to the doubles semifinals alongside Austria’s Philipp Oswald, with the duo claiming a hard-fought 6-3 2-6 [18-16] quarterfinal victory against Spanish combination Pablo Carreno Busta and Jaume Munar.