Kyrgios serves up victory in Halle opening round

Australia's Nick Kyrgios is through to the second round at an ATP 500 grass-court tournament in Germany. 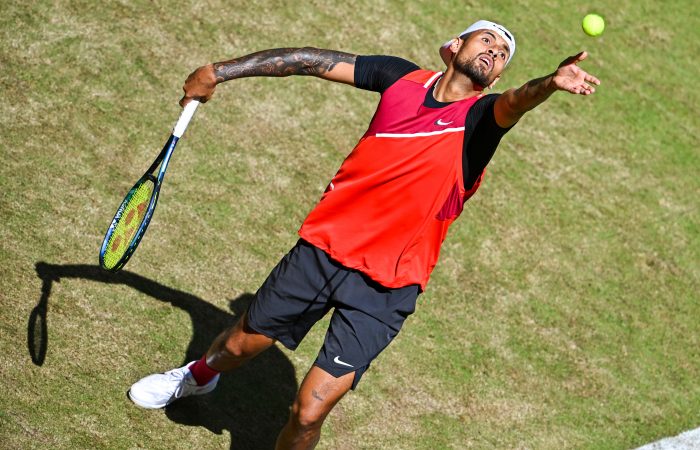 Nick Kyrgios has set-up a second-round showdown with world No.6 Stefanos Tsitsipas at an ATP 500 tournament in Halle.

The Australian wildcard made a winning start to his campaign at the German grass-court event by beating world No.66 Daniel Altmaier 6-3 7-5 in the opening round.

Kyrgios served eight aces and did not face a break point in the 67-minute encounter.

“He really started to get the crowd involved, got himself going. So I’m pretty happy with the way I closed that out,” Kyrgios said.

Return of the NICK 🙌@NickKyrgios seals a 6-3 7-5 win over Altmaier at @ATPHalle in STYLE! pic.twitter.com/EOKb0XaI74

World No.65 Kyrgios has won two of his three previous tour-level meetings against the second-seeded Tsitsipas.

“I can say playing him on grass, for sure, is going to be quite difficult,” Tsitsipas told ATPTour.com about the match-up.

“I’m just going to go out there and enjoy myself. Let’s see what that brings. He’s fired up playing on the grass-court season. I’m fired up too. I really hope to have a great match against him.”

Alex de Minaur has continued his impressive form at Queen’s Club, advancing to the men’s doubles quarterfinals at the ATP 500 tournament.

The 23-year-old Australian and British partner Cameron Norrie upset third-seeded duo Wesley Koolhof and Neal Skupski in the opening round, scoring a 7-6(4) 5-7 [10-6] victory.

World No.7 Koolhof and world No.8 Skupski have won a tour-leading five ATP doubles titles so far this season, including last week’s ‘s-Hertogenbosch title.

Sam Stosur and Chinese Taipei partner Latisha Chan have booked their spot in the women’s doubles quarterfinals at a WTA 250 tournament in Birmingham.

Chan will now face her younger sister, Hao-Ching Chan, in the quarterfinals.