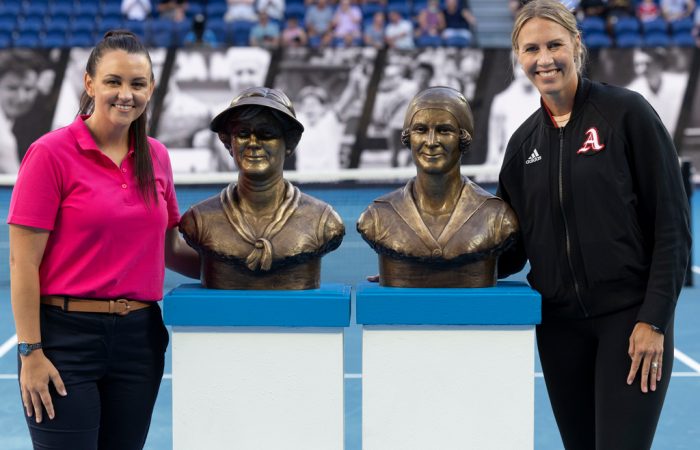 As Maude Margaret Molesworth and Joan Hartigan entered the Australian Tennis Hall of Fame at Rod Laver Arena tonight, the path they’d forged for generations of woman was gloriously illuminated.

With women afforded fewer opportunities and often taking a back seat to men at the time, the path to major titles was significantly more difficult.

Molesworth defied those challenges to triumph at the inaugural women’s tournament 100 years ago and defended her title in 1923. Hartigan was a three-time champion in the 1930s.

While their achievements are warmly celebrated, few people are prouder of the champions’ trailblazing feats than their direct descendants.

Molesworth’s great granddaughter, also Maude Molesworth, is named in honour of her ancestor and has been delighted to gradually learn more about her far-reaching impact.

“When I was younger, I knew she was an Australian tennis champion and over the years I have come to know more about her and especially who she was as a woman,” said the younger Maude of the Inaugural champion, who went on to become one of Australia’s first female professional tennis coaches.

“She was a pioneer for women in sport … It is an honour to carry the name Maude and it feels wonderful to know Maude was not just a tennis champion but also a coach, a teacher, a mentor and an advocate for women and sport in her time.”

Molesworth’s grandson, Hugh, explained the inspiration of naming his daughter in his grandmother’s honour.

“I liked the idea of keeping the names and memories of our ancestors and inspirational figures in our lives,” he said.

“My grandmother was a courageous and inspirational figure who was a commanding presence.”

“She was the first woman to become a professional coach and she later became an advocate for women in business.

“She would be very proud and very honoured to know she has been inducted.”

There’s a similar sentiment from Hartigan’s family, with her son Thomas explaining the enormous honour that his mother placed on the early Australian championships.

“She would feel immeasurably proud and humble. She would be embarrassed by the attention, but she would be proud of it,” Bathurst said.

“The women’s tour is now a headline at the Australian Open and that would have really pleased her because she played only ten years after (women) were allowed to play.”

Bathurst explained how his mother’s appreciation for her time in tennis grew throughout the years.

“She was modest, so she didn’t talk about it all that much; as she got older, she reminisced about it but more about the friends she made from it,” he said.

“She used to say that she thought they had more fun in her day.”

Never was that truer than in Hartigan’s national championships.

“A lot of people talked about her Wimbledon successes,” Bathurst added of his mother’s three semifinal appearances.

“But she loved the Australian Championships, and it was her crowning achievement.”