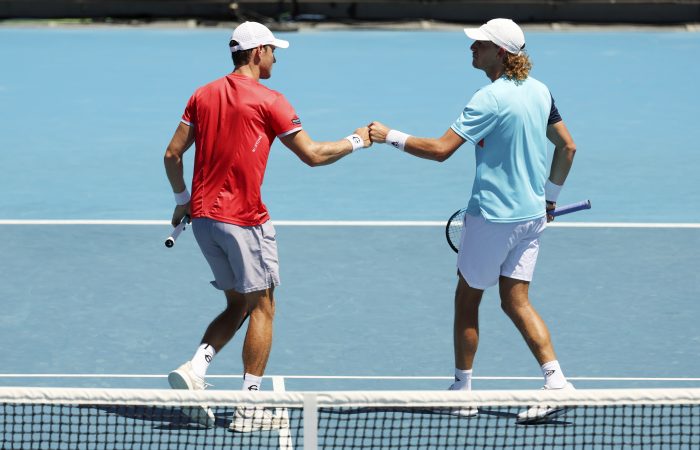 Matt Ebden and Max Purcell have scored another impressive win to book their place in the Australian Open 2022 men’s doubles quarterfinals.

The Australian combination recorded their second consecutive victory against a seeded team, beating No.13 seeds Raven Klaasen of South Africa and Ben McLachlan of Japan 7-6(3) 6-3 at Kia Arena today.

A dominant serving display was the key to Ebden and Purcell’s success, firing nine aces and winning 88 per cent of their first serve points.

They saved all three break points they faced in the 89-minute encounter as well, which came in Ebden’s final service game. From 0-40 down, the Aussies won the final five points of the match.

“The last game was a tricky one,” Ebden said. “But we held our composure, stayed strong and got it done. So we’re super happy.”

It is a second AO quarterfinal for 23-year-old Purcell as well, who previously reached this stage in 2020.

It is their second Grand Slam quarterfinal appearance as a team, having also progressed to this stage at last year’s US Open.

“I’m really fortunate to have Matty take me under his wing on the doubles court and hopefully we can take it further this week,” world No.34 Purcell said.

Ebden and Purcell now face in-form Dutchman Wesley Koolhof and Brit Neal Skupski in the quarterfinals. The No.10 seeds are currently on an 11-match winning streak after scooping titles in Melbourne and Adelaide earlier this month.

“In our home Slam and with this crowd behind us, we just want to go crazy and go for it. That’s our plan,” Ebden said of the match-up.

Unfortunately Aussie wildcards Dane Sweeny and Li Tu won’t be joining them in the quarterfinals, after losing their third-round clash with American Rajeev Ram and Brit Joe Salisbury today.

The No.2 seeds and AO 2020 champions recorded a 6-4 6-4 win at John Cain Arena, ending a dream Grand Slam doubles debut for the Aussie pair.

The No.9 seeds scored a straight-sets win against Ukrainians Marta Kostyuk and Dayana Yastremska to move into the quarterfinals.