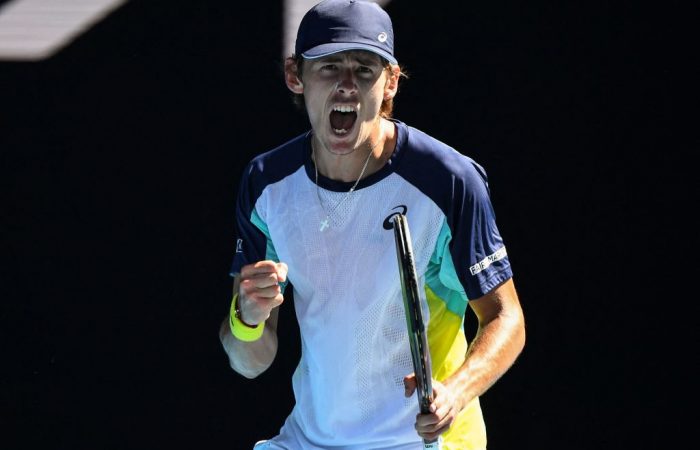 Alex de Minaur is the latest Australian to advance to the third round of Australian Open on a big day four at Melbourne Park.

Following the earlier success of Chris O’Connell and Maddison Inglis today, De Minaur claimed a  6-4 6-4 6-2 over Poland’s Kamil Majchrzak in an hour and 39 minutes.

“I’m very happy, especially to get my first win ever at Rod Laver Arena in an Australian Open,” De Minaur told Jim Courier after the match.

“I’m happy to be able to play on an amazing court in front of my home fans.”

The Demon is through to the third round! 👿#AusOpen – Live on Channel 9 and 9Now pic.twitter.com/8lLlcILkaR

De Minaur began well, breaking Majchrzak in his second service game before fighting off two break points to move to a 3-1 lead.

After surviving that little scare, he served out his remaining games strongly to take the first set 6-4.

Striking 14 winners to eight and winning 16 out of 18 points on his first serve, De Minaur finished the set with his fifth ace.

The Australian maintained his serving level in the second set, winning 80 per cent of points on his first and 70 per cent on his second.

Dropping only six points on serve for the entire set, De Minaur closed it out 6-4, and with a strong lead, had victory in his sights.

The key moment came the fifth game when his ability to keep the ball in play forced errors from Majchrzak and brought about another break of serve that helped him secure that second set.

The third set was all one-way traffic, with the 22-year-old steamrolling Majchrzak 6-2 in 27 minutes, with two more breaks of serve.

De Minaur struck 35 winners to 25 for the day, served 11 aces to three and won 85 per cent of points on his first serve.

De Minaur has now reached the third round in his last three Australian Opens, having lost to Nadal in 2019 and Fognini in 2021. He was absent with injury in 2020.

The world No.42 now faces 35-year-old Spaniard Pablo Andujar as he seeks to reach the last 16 at Melbourne Park for the first time.

“I know Pablo very well; I’ve hit a lot with him. He’s a terrific competitor and he’s had some amazing wins,” De Minaur said.

“I’ve got to keep my positive vibes going,” re added, in reference to his 2022 New Year’s resolution.

After a tougher end to 2021, de Minaur got straight back to work, entering the season in the best physical shape of his career.

“I just knew that as soon as it was done, I had to get back on the ground, I had a bit of a down year last year, so I was determined to make up for it.

“I wanted to be in the best shape of my career and hard work pays off.

“Time to let my fitness do the talking. I want to chase every ball and make things as hard as I can for my opponents.”

So far so good, for the former world No.15 who moves on to the third round having won six consecutive sets, and eight of his last nine this year.