Persistence pays as Inglis advances to Australian Open third round

Maddison Inglis builds on her winning momentum at the Australian Open, with a hard-fought victory over Hailey Baptiste securing her progress to the third round. 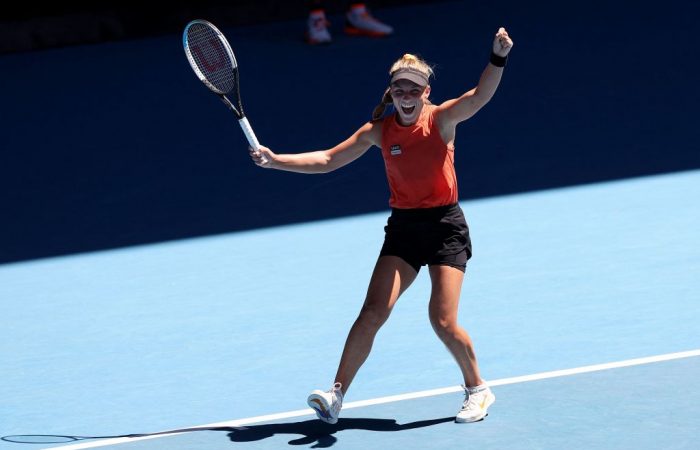 After starting her AO 2022 campaign without a single win in a Grand Slam main draw, Maddison Inglis now has two of them.

“It’s just so special. Playing on this court in front of this crowd – and now I’m in the third round,” said the emotional West Australian, who will face Kaia Kanepi next.

“I just can’t believe it at the moment.”

Believe it, Maddy! You're in the third round of #AO2022 😁 pic.twitter.com/JgSCgj0tGV

In parallel to her career trajectory so far, persistence paid for the 24-year-old Inglis as she faced the powerful American.

Inglis is contesting her fifth Grand Slam main draw, after debuting at Australian Open 2016 as an 18-year-old wildcard recipient.

Her next major appearances were at the French and US Opens in 2020. After twice stalling in qualifying, Inglis returned to the Australian Open main draw in 2021.

A similar tenacity was required against Baptiste, who dropped just two sets on her way through qualifying and overcame higher-ranked Caroline Garcia in the opening round.

With both women targeting a Grand Slam breakthrough, Inglis was the first to strike. She edged ahead with the first service break early in the opening set and while she couldn’t consolidate, Inglis immediately gained another break and built a 5-4 led.

But it was far from easy progress for the local, who twice served for the opening set with Baptise fighting back each time.

Inglis finally gained the ascendancy in the tiebreak, only for Baptiste to seize control with a 4-0 lead in the second set.

The match inevitably progressed to a deciding set, where the American seized momentum by breaking Inglis’ serve in the opening game.

But with a passionate crowd cheering her on, Inglis found another level, running away with the final six games to secure the career-defining win.

“It was a crucial game there in the third game. I think I faced a couple breakpoints. Getting that game, then breaking her in the next, I just felt like I was feeling it. Even at 2-Love,” said Inglis.

“I think as the scoreboard got more even, I started playing my game a bit more. I was a bit more aggressive, served a lot better in the end there.”

Inglis withstood 32 winners from the big-hitting but erratic Baptiste, who will rue her 44 unforced errors.

The Australian will aim to improve on a 64 per cent first serve ratio and her own 32 errors – but given an overall tenacious display, also understands that success can lie beyond the numbers.

“I’m stoked. To get another one here in Melbourne is really, really special,” Inglis added.