With a series of impressive wins to start the season, Alex de Minaur's motto to stay positive in 2022 is already paying off. 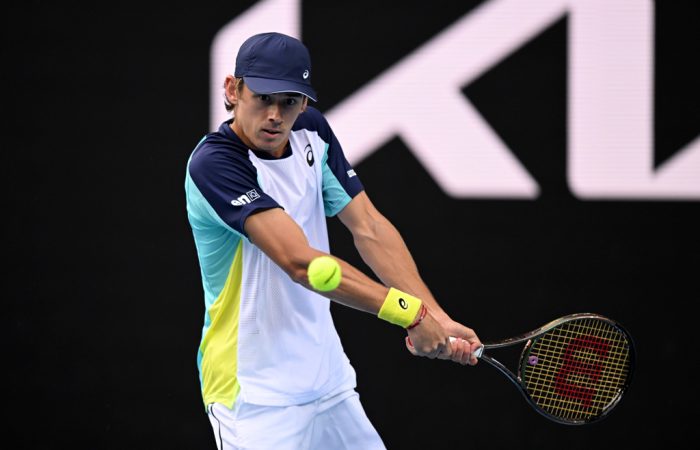 Alex de Minaur is hoping his early season momentum rolls on as he shoots for a return to the world’s top 20 this year.

A difficult end to 2021 appears a distant memory for the young Australian, who has hit the ground running at the start of a new campaign.

The world No.42 backed up some strong ATP Cup performances in a polished first-round display against Italian teenager Lorenzo Musetti at Australian Open 2022.

After being challenged early and falling behind, De Minaur took complete control of the match to win 18 of the last 24 games.

A new year’s resolution to stay positive at all times was a driving factor.

“For me, the most important thing was my attitude. You know, that was what won me the match. I was positive throughout the whole night,” De Minaur said.

“I didn’t let anything get in my head, and I just kept on going. I was playing every point for its merit, and eventually things started to go my way and I was able to take control.

Note to self…. Keep shoes on while playing a tennis match 🤦‍♂️😂 pic.twitter.com/anKsPgQESD

In his first-round match, de Minaur was edged by Musetti in short rallies, with the Italian winning 47 points to 42 on rallies of four shots or fewer.

But on the longer points, his work-rate and tenacity stood out. He won 74 points to 42 on rallies of five or more shots.

“I’m cautious of myself as a competitor, as well. I feel like if I’m on top and I’m focused and determined and trying to win every point, I can be a very difficult opponent to beat, and especially when I’m staying tough,” the Australian said.

“I had that in the back of my head. I knew I needed to start the sets well and hopefully get that early break so I’m just happy with my level all around.”

In the lead-up to Wimbledon last year, was a semifinalist at Queen’s and won a first title on grass in Eastbourne, elevating his ranking to a career-high world No.15.

In the weeks that followed, the 22-year-old contracted COVID, forcing him to miss the Tokyo Olympics. He won just five of his last 17 matches for the remainder of the season, with his ranking dropping to No.42.

> READ: De Minaur off to a winning start at Australian Open 2022

The strong fitness regime served him well as he started the new year with wins over Matteo Berretini and Ugo Humbert – both high-ranked opponents – at the ATP Cup in Sydney.

“We had a tough group at the ATP Cup, and we were very close to getting through,” said De Minaur.

“I especially stepped up when I needed to and had quality wins against Berrettini and Humbert.

“Humbert is one of the biggest ball strikers, especially in an indoor court and in fact that match was huge for me, because it got me the last seeding for this week, so it gave me a little bit of protection in that sense.

“It was a very tough pre-season. It’s always good to see things going well so that gives me a lot of confidence.”

At 22 years old, De Minaur is still at the start of what should be a long and successful career. He notes the positive influence of Australian players including Sam Stosur in his formative years.

Stosur is playing her final main draw singles event at this year’s Australian Open, and De Minaur recalls the guidance she provided to him as a young boy in Sydney.

“Funnily enough, as a kid I actually hit with Sam maybe once or twice in Sydney, and I can really remember those days,” he reflected.

“I think we might have hit maybe on hard once and on clay out in Homebush. She’s always been an incredible competitor and role model.

“I remember even back then with me being a little kid, a little junior, she was very nice to me.”

As a determined De Minaur aims to maintain his good form with a win over Kamil Majchrzak – a world No.107 from Poland, at Rod Laver Arena today – it’s clear the positive vibes have rubbed off.