Chris O’Connell achieves a major career breakthrough as he stuns world No.13 seed Diego Schwartzman in the Australian Open second round. 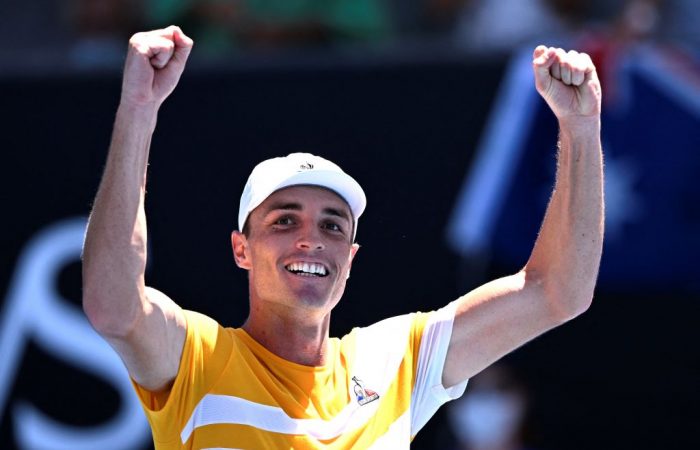 Australia’s Chris O’Connell has stunned world No.13 Diego Schwartzman to secure the biggest win of his career so far.

It is O’Connell’s first win over a top-20 player, and his first time qualifying for the third round of a Slam.

“The biggest win of my career, and to do it at the Australian Open in the second round is an unbelievable feeling,” O’Connell said.

“It is the best feeling I’ve ever had on a tennis court. I’ve been playing since I was four, and to have something like this is a dream come true.”

It marked O’Connell’s 10th main draw Grand Slam match, with all of them coming against players then ranked in the world’s top 80.

He now has an impressive four victories from those 10 matches, conceding an average of 94 ranking points to every player he has faced at a major.

Wildcard Chris O'Connell scores his first top-20 win over world No.13 Diego Schwartzman to reach the third round in a Grand Slam for the first time 🙌#GoAussies • #AO2022 • #AusOpen pic.twitter.com/iCoLkaM9vV

O’Connell started well against Schwartzman, creating break point chances at 3-2 in the opening set, but the speedy Argentine dug his way out and broke the Australian in the next game to take hold of the first set.

But O’Connell would not be denied, breaking back for 5-5 after an eight-minute game.

With the opener going to a tiebreak, O’Connell found himself down 4-5 but peeled off four of the next five points to win a pulsating 84-minute first set.

“I knew how crucial that first set was. It was really warming up out there. It was a battle back and forth so it was absolutely crucial I get that first set in the heat,” he said.

The second set progressed much faster with both players winning a combined 88 per cent of points on first serve and holding comfortably with the score moving to 4-4.

When O’Connell suddenly broke to love in the ninth game, it sent the parochial Aussie crowd into raptures.

O’Connell created three break point chances immediately in the opening game of the third, but the tenacious Schwartzman fought desperately to stay in the match and managed to scramble a hold.

O’Connell didn’t have to wait long though, securing the crucial break at his very next opportunity as the crowd inside Court 3 continued to grow.

Schwartzman fired one last shot when he broke back to get to 4-4 in the third, but O’Connell immediately broke to love and calmly served out the win.

It's never too late to play your best tennis 👏

After 11 years on tour, @chrisoconnelll scores the biggest win of his career with an inspiring performance against Diego Schwartzman.@Kia_Worldwide · #Kia · #MovementThatInspires · #AusOpen · #AO2022 pic.twitter.com/4mO651D75i

The Australian struck 44 winners to 27 and won 71 per cent of points at the net in a highly impressive display.

Schwartzman had won 46 main draw Grand Slam matches in the previous five years, which ranks seventh amongst active male players. He has reached four quarterfinals and a semifinal in that time.

O’Connell appeared on track to crack the top 100 last year, but a constant string of setbacks halted his progress.

He missed two months with an ankle injury early in the year, before developing Osteitis Pubis later in the season. On returning from that injury, he contracted COVID, having just reached the quarterfinals of the ATP 250 event in Atlanta.

“The biggest thing for me is staying healthy. Not having these injuries that keep me off the tour for two months of tournaments.

“Last year I missed I think five-six months and I can’t be doing that. I just have to stay healthy,” O’Connell said.

“I want to thank Tennis Australia for giving me the opportunity to be in the third round. If they didn’t give me a wildcard, I’d be playing qualifiers so I’m very grateful.”

O’Connell will now take on big serving American Maxime Cressy for a place in the last 16.

“He’s a completely different player to Schwartzman, which will be interesting.

“I played John Isner in Atlanta last year, which was an experience, so I’m looking forward to playing Cressy who is very similar.”