Confidence the key for Priscilla Hon

After a strong start to the 2022 season in Adelaide, Priscilla Hon is determined to maintain positive momentum at the Australian Open. 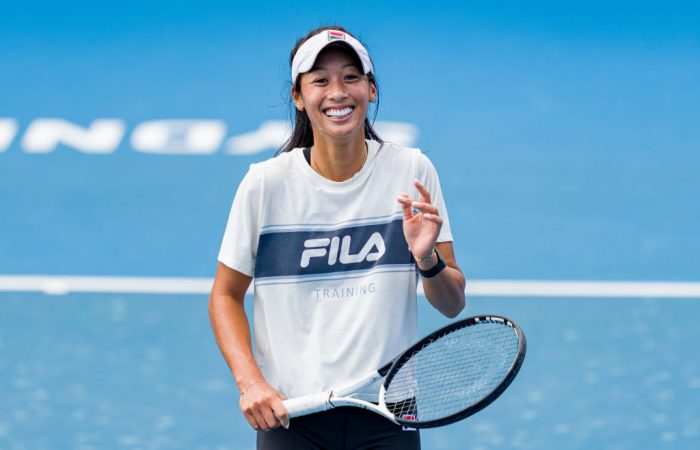 Priscilla Hon is hoping her giant-slaying performance in Adelaide earlier this month is only the beginning of a big season on tour.

Hon produced the biggest win of her career when she toppled two-time Wimbledon champion Petra Kvitova in the first round of the first Adelaide International, before a highly competitive performance against former world No.1 Victoria Azarenka at the same tournament.

Hon travelled to Sydney the following week and lost a tight clash with Romania’s Jacqueline Cristian.

The Queenslander had endured a tough 18 months as she battled to overcome a significant hip injury.

While that physical ailment healed, Hon also focused on building her mental strength during her time off the court.

“I think what I did really well and what I was aiming for was keeping a cool head and not being overwhelmed playing Petra, obviously who I’ve grown up watching for many years,” Hon said. “Taking that out of my head and just playing the game was key for me.

“It’s been something I’ve been really working on, not being scared playing these top-30 girls, actually believing I can beat them. I think in the last year I’ve been working really hard on it.”

Hon’s record against top-50 opponents was 1-9 entering the Adelaide International but shifting her focus from the pure numbers has been another key feature of her work off-court.

“I think just being present and just taking whoever you’re playing down there, just don’t think about what their ranking is,” she related.

“In tennis it’s always about the ranking, it’s about who you’re playing, what she’s ranked, what she’s seeded. Just kind of taking that out of the picture.

“At the end of the day, you’re just playing against the ball.”

The three-set victory over an experienced campaigner, ranked world No.17 at the time, is a reinforcement of Hon’s hard work.

“I’ve struggled in the past to close out matches quite a few times. They’re kind of nightmares for me when I think back to them. I’ve had so many opportunities over the years,” she said. .

As the tour began to emerge from a pandemic-related hiatus in August 2020, Hon tore the labrum in her hip. It compounded the 23-year-old’s already-lengthy absence from the tour.

It was particularly untimely for Hon, who had reached a career-high singles ranking of world No.118 in late 2019, and progressed to the second round of the Australian Open in the months before the pandemic.

Hon is slowly working her way back to peak fitness and hoping the new year brings with it some good fortune.

“Yeah, I think I’m getting there slowly. I think I started getting into a groove at the end of last year,” she said. “Obviously the year was a bit strange. I started at French, and after Wimbledon my hip started hurting again, so I took maybe another five weeks, then came back after the US Open.

“It’s been a weird year. I felt like I had momentum from Wimbledon, then I couldn’t play again. Also, when I started feeling like I was kind of getting back to where I was in 2019, the year ended.”

Currently ranked world No.221, Hon has a chance to further recover ground as she takes on No.31 seed Marketa Vondrousova, another Czech player, in the first round of Australian Open 2022 today.

In the longer term, the Queenslander is working towards a goal to make her top-100 debut.

“I have been getting pretty frustrated with not breaking into that top 100 the last couple of years. Hopefully I can do it this year. It is tough because when you are that close and you don’t get there for a couple years in a row, it kind of gets to you. Hopefully that will turn around this year.”