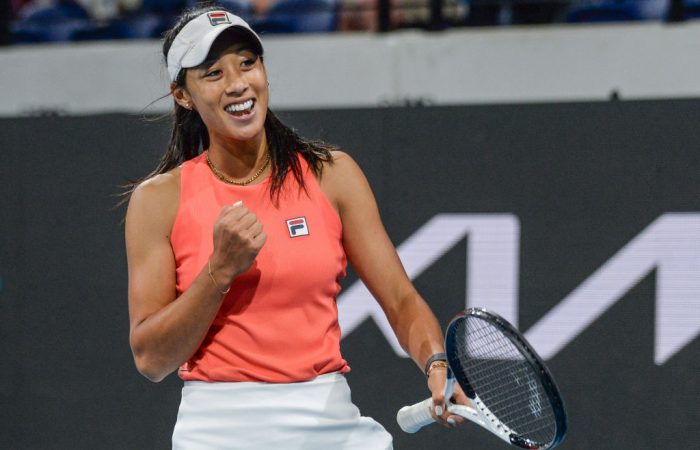 Priscilla Hon has produced the biggest win of her career in a dream start to 2022.

The world No.263 Queenslander shocked two-time Wimbledon champion Petra Kvitova with a brilliant 6-7(4) 7-5 6-2 victory at The Drive in Adelaide.

“Honestly it doesn’t really feel real right now,” the 23-year-old Hon said on court after her first victory against a player ranked inside the world’s top 40.

“It will probably sink in later but I’m just so happy right now. I can’t even explain how much I’ve been waiting for this moment.”

Hon had played well early, but when the Czech broke midway through the second set to lead 7-6 4-2 it looked like she might have done enough.

But Hon turned the tables dramatically, winning 11 of the last 13 games to secure a huge win in the context of her career.

BIGGEST win of her career 👏

🇦🇺 @pribo98 comes from a set down to upset Kvitova for her first Top 20 victory!#AdelaideTennis pic.twitter.com/n2ziYKoSLO

She had to hold her nerve as Kvitova saved three match points in a row with some blistering winners before eventually an error came on Hon’s fourth attempt at closing it out.

“I was pretty proud of how I held up at the end,” said Hon.

“I’ve been working really hard on that, staying calm.

“Obviously against top players they don’t give it to you so you’ve got to really work hard for it but I felt really comfortable playing out here.”

Hon had a 1-9 record against the WTA top 50 in her career, with the only victory coming against fellow Australian Alja Tomljanovic (ranked 42 at the time) in 2019.

She credits today’s win to a change in mindset against the top echelon of players on tour.

“It’s clearly working now but it’s been tough over the years playing top girls and thinking that you can actually beat them is a different story.

“I think my mindset was very different this time coming out.”

Hon has been troubled by a hip injury for the past year, having reached a career peak of world No.118 late in 2019.

“I was injured for almost a year, so I think I was even more pumped to come back on tour and just focus on what I wanted to in the last year,” she said.

Hon will hope to replicate the career-best performance in the second round, when she faces either Paula Badosa or two-time Australian Open champion Victoria Azarenka.

In another good result for Australia, world No.45 Ajla Tomljanovic began her 2022 season in style with victory over Brit Heather Watson.

Tomljanovic had to fight hard throughout, but held her nerve on the big points to prevail 6-4, 7-6(5) in one hour and 55 minutes.

“The first match of the year is always tough, so to get that first win is really good.”