Maddison Inglis claims a confidence-boosting win over Danka Kovinic in the first round of the Adelaide International 2. 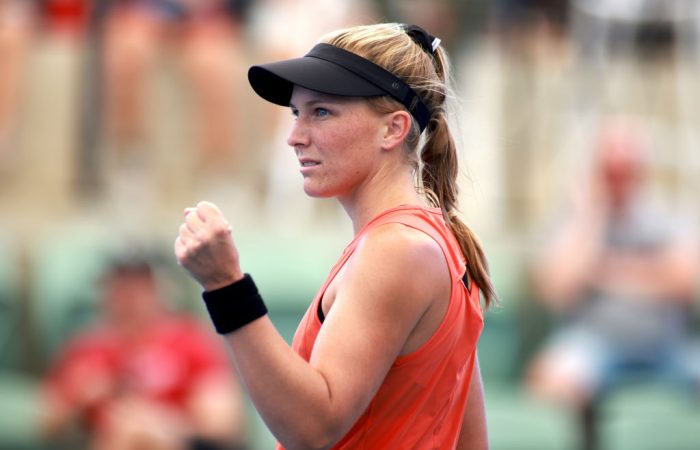 Maddison Inglis continued her strong preparation for Australian Open 2022 with a commanding first-round victory over Montenegro’s Danka Kovinic at the Adelaide International.

With temperatures in the high 30s it was Inglis who made the hot start, peeling off the opening three games, including two breaks of serve.

She would eventually take the first set 6-4, holding to love as she closed it out in a game that demonstrated how well she’d served for the majority of the opener.

Kovinic hit back hard to claim the second set 6-1 in less than 30 minutes, before both players took an extended break due to the heat.

Kovinic won 85 per cent of points on first serve in the second set, compared to 46 per cent for Inglis (Inglis won 78 per cent in the first set).

The 10-minute heat break allowed Inglis the chance to not only freshen up, but also channel the mindset that saw her play so well early in the contest.

“I was a little bit frustrated with how easily that second set went away from me,” she said.

“I took that chance to refocus a little bit and get back to what I was doing at the start of the match.”

The third set was an arm wrestle in the early stages, until a key moment in the fifth game.

Serving at 2-2, Inglis was in trouble at 15-40 before landing three first serves in a row to fight back and hold serve. She broke in the next game to seize the momentum.

Inglis ran with the final set, claiming last four games. The shot of the match was on the final point, as she hammered a forehand down the line for a winner.

Inglis will now face World No.31 and tournament fourth seed Tamara Zidansek of Slovenia in the second round.

“I’ve never played Tamara before, and I’ve never practised with her, so I’ve got a bit of work to do tonight to prepare myself for tomorrow,” said he Australian.

“She’s a terrific competitor, and she showed that with a long match today, so that’s going to be a big challenge.”

Inglis was granted a wildcard into Australian Open 2022, and is confident this week will prove invaluable for her preparation.

“It’s awesome to get a few matches under my belt, especially some long matches like today with some really tough opponents.”

Another Australian, Storm Sanders, was eliminated by Italian Jasmine Paolini , a 7-5 6-2 winner in their first round.

The first set was a tight tussle with Sanders successfully saving seven break points and getting to 5-5.

But eventually Paolini was able to take her opportunity though and it was eighth time lucky as she secured the break and the set 7-5.

Her relentless pressure remained as she secured three breaks of serve in the second set. Sanders also collected one herself but unfortunately it was to no avail.

Sanders has enjoyed a good two weeks on the tour, with a wildcard entry into the Australian Open, a WTA doubles title in Adelaide, a victory over Kirsten Flipkens in qualifying yesterday, and a competitive showing against Elena Rybakina a week ago.

On the men’s side Alex Bolt was looking to set up an all-Australian second-round with Aleksandar Vukic but unfortunately went down to American veteran Steve Johnson 6-4 6-4.

In a quirky twist, Johnson eliminated Vukic in last week’s Adelaide International One competition and will meet him again here in the second round.