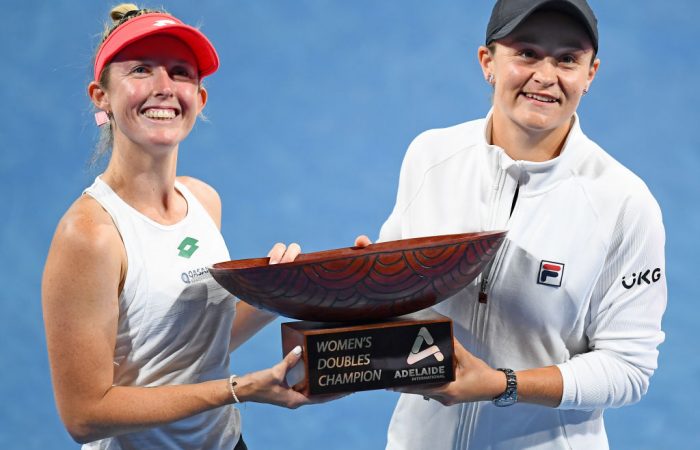 Ash Barty and Storm Sanders have rounded out a magnificent day for Australian tennis by claiming the women’s doubles title at the Adelaide International.

The victory comes hours after Barty won her 14th WTA singles title at the same venue, with the wave of momentum rolling through as the pair dominated the contest, claiming it 6-1 6-4 over Darija Jurak of Croatia and Andreja Klepac of Slovenia.

The Australian pair never looked in any serious danger as they powered to a comprehensive victory, with three breaks of serve to round out a wonderful week.

Barty and Sanders broke early in the opening set, and again in the sixth game as they claimed it in just 24 minutes.

The second set began with another early break after wonderful work at the net by Sanders, and the pressure never let up with the Aussie pair generating break point chances in the next three return games.

Jurak and Klepac fought hard to get it to 4-5, but Barty’s dominance was on display as she served out the final game with two aces and an unreturnable serve to seal the deal in 68 seconds for a 6-4 set.

For Sanders this is a third WTA doubles title, and for Barty it’s a 12th to accompany her 14 singles titles. It marks the third time she has won both singles and doubles titles at the same event.

Ash Barty and Storm Sanders take the #AdelaideTennis doubles title with a 61 64 win over Jurak/Klepac.

Barty sweeps the singles and doubles at a tournament for the 2nd straight season, having done so at 2021 Stuttgart. pic.twitter.com/fHCEZSrX5T

The match stats were dominant, with Barty and Sanders winning 23 points on return to 13, serving six aces to zero and facing only one break point for the match.

Sanders spoke post-match about winning her first WTA doubles title since February of 2020.

“I think Ash is sick of talking today so it’s my turn,” she joked.

“It’s great to do this in front of so many fans. This is one of our favourite tournaments so it’s a great feeling.”

“Ash is an unbelievable player and an even better mate so thanks for the week as well.”

This was the first tournament the pair played together since their quarterfinal run at the Tokyo Olympics in 2021.

Sanders reached the semifinal of the Wimbledon doubles event last year, and the quarterfinals of the US Open.

She also received a wildcard into the singles draw for Australian Open 2022.