Having worked hard to reach a dream semifinal at his home tournament in Adelaide, Thanasi Kokkinakis faces No.1 seed Gael Monfil for a place in the final . 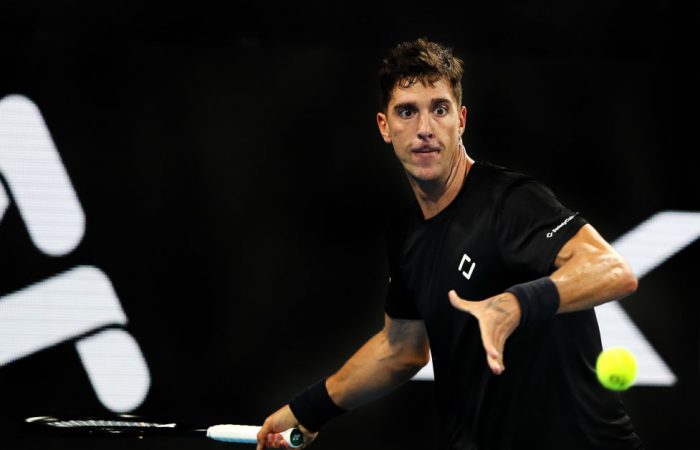 As Thanasi Kokkinakis prepares for his first ATP semifinal appearance since 2017, you would have to search far and wide to find anyone who would begrudge him this opportunity.

The 25-year-old has produced an outstanding run in his home city at the Adelaide International, with victories over John Millman, Frances Tiafoe and most recently Mikael Ymer in a marathon quarterfinal last night.

“I’m stoked. It’s been a lot of hard work, especially in the off-season,” said Kokkinakis.

“But just the year past as well, it makes it all worth it, it’s my first professional tournament back home and I have friends and family here watching,” said Kokkinakis.

> READ: Thanasi Kokkinakis – I still feel like I’ve got a lot to give”

With Kokkinakis suffering numerous injury setbacks over the course of his career, some doubters have been prepared to consign him to the long list of players never to reach their potential because their body wouldn’t allow it.

Kokkinakis admits he even felt that way himself during some of the lower points in the journey.

“It’s just a reward for all the work I’ve done behind the scenes,” he said of his progress to the Adelaide International semifinals.

“There’s just been talk I was done for a while and I even thought it myself a couple times. Now to be playing some good tennis and beating quality players, I’m really happy.

“It proves why I keep coming back from having some tougher times and why I keep wanting to play.

“I’ve had a fairly healthy year the past 12 months and I’m hoping the trend is upwards.”

Kokkinakis has a very vigilant approach to recovery, given that history of injuries, and he’s hoping it pays off ahead of tonight’s semifinal clash with Gael Monfils.

“I think there’s a bit more of a focus on my recovery now, a bit more awareness on my body and the kind of the things I need to do, and what things kind of work for me,” he related.

“Plenty of ice baths which are never fun, but that’s part of what you have to do. It’s the healthiest I’ve been, so I’m stoked for that.”

While top seed Monfils stands between Kokkinakis and a final in his home city, the Australian is excited to take on someone he has always admired.

“We are pretty close. We talk a lot of rubbish to each other, and he is a really good dude,” Kokkinakis said of the Frenchman.

“He’s always been one of my favourite guys, especially how entertaining he is. He just brings the crowd to life.  “I think tennis needs more personalities like that.

Kokkinakis is facing the Monfils for the first time in Adelaide, and understands that the 35-year-old – who at world No.21, is ranked 150 places higher – presents many challenges.

“For me, I’m going to keep trying to do my thing, play how I play, play aggressive. It’s going to be a fun match,” he said

“It’s going to be a nightmare to try to get a ball past him.”

Kokkinakis’s outstanding form has been rewarded with a wildcard into Australian Open 2022, and he is hoping it’s the last time he’ll ever need one.

“I’m definitely stoked and thankful to TA for that.

“As I said to them on the phone, I’m hoping I won’t need another one and that’s my goal.

“My goal is definitely to play out the year and have a good year and not need to rely on anyone for any wildcards again.”

All the hard work is paying off.