Thanasi Kokkinakis holds his nerve against Mikael Ymer to reach a first semifinal on the ATP Tour in almost five years in Adelaide. 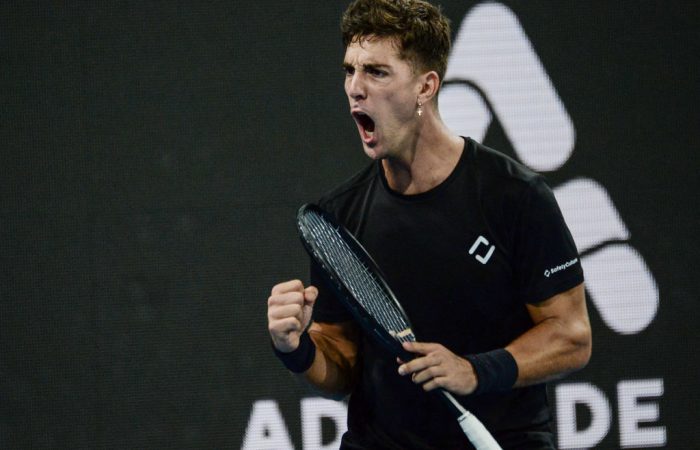 Thanasi Kokkinakis has roared into his first ATP semifinal since 2017 with a stirring performance in front of an adoring home crowd in Adelaide.

Kokkinakis held his nerve in a marathon against a gallant Mikael Ymer, claiming a 7-6(9) 4-6 6-4 victory in two hours and 45-minutes.

It marked the second time in three nights that the Australian rose to the challenge in the third set, helped by passionate South Australian fans at The Drive.

“(It) really got me through.” Kokkinakis said on-court post-match. “I felt like I was playing a human brick wall, so the support means the world.”

The first set was gripping tennis, with both men serving beautifully and trading blows with some outstanding ball striking.

Kokkinakis fired down seven aces and was striking winners regularly with his power and reach. It was in stark contrast to the speedy Ymer, who was running down everything and extending the rallies.

Not a single break point chance emerged throughout the opening set and in the tiebreak both players had to dig deep, with Kokkinakis saving three set points before clinching it 11-9 with his second opportunity at set point.

The Australian struck 15 winners to Ymer’s 10 in the opening set and won 82 per cent of points on his first serve.

In the opening game of the second set, the match featured break points for the first time, with Ymer pouncing to take the early lead. It  would be the only break of the set as he took it 6-4.

The Swede’s play at the net was a feature of his performance, winning 90 per cent of points played at the net to this point of the match.

With the contest now in a deciding set, Kokkinakis lifted in the same way he had against Frances Tiafoe in the second round. He produced a strong hold in the opening game and his first break of the match in the second.

The break came after some brilliant defending by Kokkinakis from the baseline, followed by Ymer’s first double fault of the night.

The local boy fired down three aces in his next game to consolidate the break at 3-0.

Ymer wouldn’t be denied though, with the world No.94 fighting back to level  3-3 as both players producing some remarkable points.

Ymer served another double fault at 4-5 to open up a break point, allowing Kokkinakis one final chance to pounce. He did so with a strong return forcing Ymer to drive the ball wide, with the home town crowd erupting.

“My sleeping patterns are out of whack; I’ve got no idea what’s going on at the moment,” Kokkinakis said.

“The other night I went to bed at 4am after the Tiafoe match, but that’s what my fitness guys are for,” he added with a smile.

Kokkinakis will now take on the Adelaide International’s No.1 seed Gael Monfils in tge semifinal.

“It’s going to be a fun match. He brings so much energy and he was probably my favourite player when I was growing up so it’s going be a lot of fun.”

Barty will also compete in the doubles final alongside Storm Sanders after the pair defeated Nadija Kichenok and Sania Mirza 6-1 2-6 [10-8] in today’s semifinal.

They will take on Andreja Klepac of Slovenia and Darija Jurak of Croatia.

An incredible point – hats off to both players! 🙌