Thanasi Kokkinakis: “I still feel like I’ve got a lot to give”

Thanasi Kokkinakis, who'll contest the Adelaide quarterfinals tonight, is confident that recent progress is a springboard for bigger success. 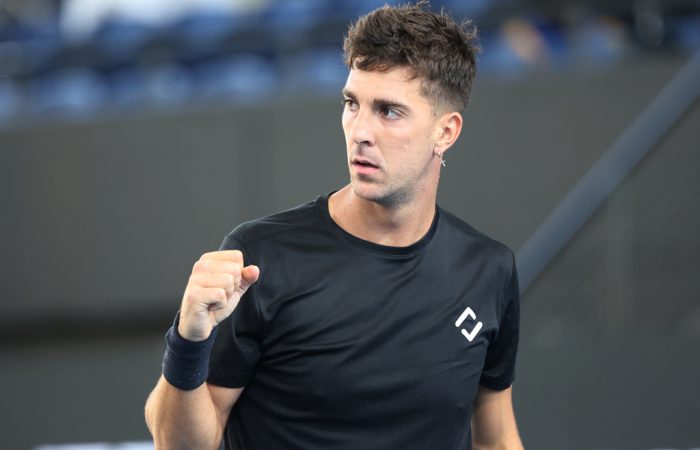 Thanasi Kokkinakis is confident the injury gods might finally smile upon him as he enters a new season fit and refreshed.

The South Australian worked hard during a gruelling 2021 campaign, mostly spent on the road, and he feels it has him primed for a fresh assault in the new year.

“Yeah, I think it definitely can’t hurt. Last year I came into the season after two years of barely any tennis, one year of absolutely nothing, then the year before I think I played five or so tournaments,” said Kokkinakis.

“Even though I’ve been around a while, it feels like I’m still relatively new, compared to matches played, tennis played and compared to all the other guys my age.

“I still feel like I’ve got a lot to give, but last year playing a lot of tough matches in tough conditions, hopefully has set me up for a better year.”

Playing in his home event, @TKokkinakis recovers from a set down to defeat Tiafoe 3-6 7-5 6-1 in Adelaide! pic.twitter.com/sGe46ilbSk

It’s been an injury-plagued journey for the popular 25-year-old, with shoulder surgery in 2016, followed by 18 weeks on the sidelines in 2017 with an abdominal strain.

On his return in 2018, Kokkinakis defeated Roger Federer in Miami and in doing so became the lowest-ranked player (at No.175) to beat a world No.1 player in 15 years.

Just weeks later he suffered a major ankle injury, followed by knee problems and eventually a persistent right shoulder issue that would limit him to just six matches between 2019 and 2020.

Twelve months ago, fresh from a first-round win at the Australian Open, Kokkinakis spoke about the troublesome journey and what it has taught him.

“It’s been really hard. But I look back on the moments where I’ve had success and the feelings I got from being on court and having good wins,” he said.

“II use that to fuel me for as long as I can. I know I can’t do this forever. So even if I’m just struggling at certain times, I kind of hang on those moments to push me through.”

Kokkinakis’ season began in his home city at the Adelaide International, and he quickly found his feet with a strong showing against John Millman in the first round and a come-from-behind win over No.4 seed Francis Tiafoe.

“I was getting a bit more edgy as the tournament was coming up,” Kokkinakis admitted. “I’d been practising well, but you never know. I was talking to my trainer, to my coaches, going through a racquet change as well that I’m trying out.

“Yeah, a lot of nerves, a bit of anxiety before I went out on the court. I think that’s normal the first match of the year. I was happy I was able to settle in and find my game.”

Kokkinakis painted a picture of what life was like on tour for Australians during 2021, with tightened protocols at all tournaments, and bio-security requirements in all countries a constant challenge during a nine-month stretch on the road.

“It was grim, just getting COVID tests, making sure they are within the window before you travel to the next event. In London I got my PDF from the test for Wimbledon, they wouldn’t accept it at the airport. I got detained in Miami for two hours, sent into a back room, because they cancelled my ESTA for no reason.

“That is just a short glimpse of what traveling was like, but people have it worse, so…”

Kokkinakis noted the unique challenges for Australian players who, unlike many overseas-based counterparts, were unable to return home during the season.

“I know I wouldn’t want to live anywhere else, but if I was home and grown from Europe or something, geez, it makes it easier. I left real early March and I got back early November.

“That’s a nine-month stint of travelling. But it’s something I knew I had to do.

“Guys, if they lose first week, they go home for a week until the next tournament. In Europe they can actually drive to the next tournament, it is only a few hours away in a lot of spots. Obviously for us, we’ve got no idea what we’re doing, we just travel with the team.

“Their teams can go home and maybe relax. They don’t have to pay for them per week, they can pay for them for a day. If they lose, they go to the next tournament. It’s definitely tough on Aussies, but as I say, I love Australia, so it’s a balancing thing.”

Still, those long months on the road were ultimately rewarding. In 2021, Kokkinakis won an ATP Challenger title in Italy, made another final and reached two other semifinals, amassing 33 wins and 21 losses for the season.

Set to contest his first ATP Tour-level quarterfinal against Mikael Ymer in Adelaide International this evening, it appears those encouraging results – and a proven ability to overcome countless challenges – have provided the fan favourite with a superb foundation for bigger successes.