Recording his first back-to-back match win on the ATP Tour since 2019, Thanasi Kokkinakis stuns No.4 seed Frances Tiafoe to reach the Adelaide quarterfinals. 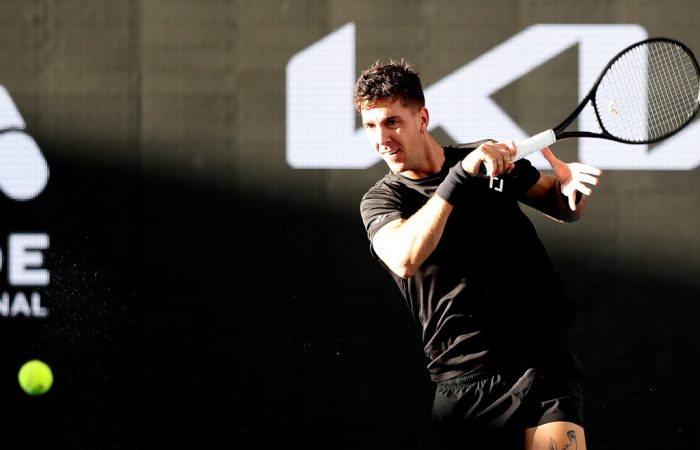 Thanasi Kokkinakis has lit up his home city of Adelaide with a scintillating come-from-behind victory over Frances Tiafoe at The Drive.

The rejuvenated Aussie downed the tournament’s No.4 seed 3-6 7-5 6-1 in another reminder of his immense talent.

Kokkinakis won eight of the last nine games and broke five times in the last two sets to wow the adoring locals who stayed past midnight to revel in the moment.

“To play in front of friends and family, and to be playing at home there’s nothing better.” Kokkinakis said on court post-match.

“To rally and play like that, and come back from what looked like it would be an ugly result is a really great feeling.”

It followed a come-from-behind win for world No.1 Ash Barty, who overcame a determined Coco Gauff in her first match for 2022.

Kokkinakis and Tiafoe both served strongly in the opening set, with the American creating and ultimately converting the only break point chance of the set, which came in the second game.

Kokkinakis battled hard to find a way back, getting to deuce twice on his opponent’s serve, but Tiafoe repeatedly unleashed strong forehand winners when he needed them most.

Tiafoe won only seven points off the Kokkinakis serve in the opening set, with five of them coming in that one game where he secured the break.

The second set was a very different situation, with five breaks of serve and 36 points in total won on return, compared to 17 in the first.

Tiafoe got the early break to increase his hold on the contest before the Australian hit back with one of his own.

Two more followed, and Kokkinakis broke again in the 12th game of the set to push the match into a decider.

The third set began as a wrestle but ended as a procession, with Kokkinakis reeling off five consecutive games and winning 18 of the last 21 points in the match.

“Frances came out and played great, I had to raise my level to hang with him,” the South Australian commented.

“He’s a bit hot and cold, but when he’s hot he’s hard to play against so I just tried to weather the storm as much as I could.

“It was looking ugly for me for a minute there so I’m stoked.”

It is the first time Kokkinakis has won consecutive matches at an ATP Tour-level event since 2019.

Much has been said about his horror run of injuries dating back to 2016, and Kokkinakis credited his team with helping to rebuild his body and his confidence.

“Everyone in my corner has helped play a part in getting me back,” said Kokkinakis, who meets world No.94 Swede Mikael Ymer of Sweden in a quarterfinal.

“It’s been the trickiest part of my career, things start to look rosy and you feel like it will be an easy climb to the top and you get more setbacks, but that’s part of it.”

“I still feel like I’ve got a lot of years left in this game and I feel like I can still reach my potential.”