Australian Alexei Popyrin has earned a main draw spot at an ATP 250 tournament in Winston-Salem. 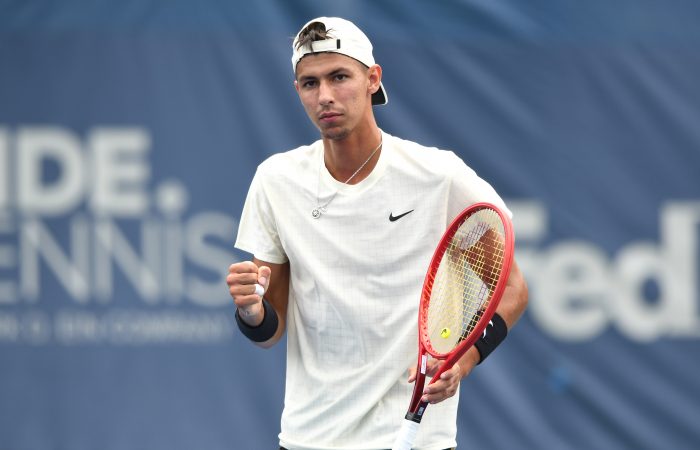 Alexei Popyrin has won back-to-back matches for the first time since May to earn his place in the main draw at an ATP 250 tournament in Winston-Salem.

World No.74 Popyrin has been pitted against American Steve Johnson in the opening round.

James Duckworth was also knocked out of the tournament, losing a heart-breaking first-round clash with Brazilian Thiago Monteiro in main draw action.

The 29-year-old Australian had three match points late in the match, but was unable to convert and Monteiro eventually closed out a 4-6 6-4 7-6(5) victory in a two-hour and 34-minute battle.

Nick Kyrgios was a late withdrawal from the tournament, unable to take to the court today for his scheduled first-round clash with former world No.1 Andy Murray due to a left knee injury.

Storm Sanders and Anastasia Rodionova are still waiting to play their first-round matches at a WTA 250 tournament in Cleveland, with neither on today’s schedule.

Rodionova is returning to the tour from maternity leave and contesting her first tournament since Australian Open 2019. Playing with Kazahkstan’s Galina Voskoboeva, they face top-seeded Japanese duo Shuko Aoyama and Ena Shibahara in the doubles opening round.

The 21-year-old from Melbourne, who is making her tour return following shoulder surgery last year, won an ITF $25K hard-court tournament in Ourense.

It is her fourth career title at ITF level – and first since April 2018.

Fourlis is currently ranked No.373 and determined to better a career-high of No.189 achieved in September 2018.