Australian James Duckworth has been eliminated in the second round of the men's singles competition at the Tokyo 2020 Olympic Games. 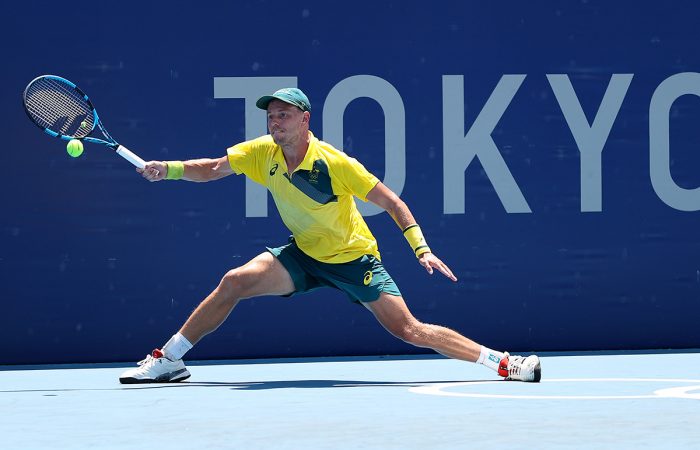 Australia’s hopes alive of winning a singles medal at the Tokyo 2020 Olympic Games are over.

James Duckworth, the last remaining Australian in the singles competition, lost his second-round match today to world No.25 Karen Khachanov.

Duckworth had his chances in a tight opening set, with the world No.77 building an early 3-1 lead.

But the in-form Khachanov, a former world No.8 who advanced to the Wimbledon quarterfinals earlier this month, was proving too solid and fought back to secure the first set in 50 minutes.

The Australian’s frustrations grew as he lost serve to begin the second set. Khachanov’s consistency was forcing Duckworth to press hard – and as he did, his unforced error count grew.

The No.12-seeded Khachanov had chances to go ahead 3-0 – but the resilient Duckworth kept fighting, determined to keep his Olympic campaign live.

However, Khachanov refused to give Duckworth a glimmer of hope and won the final four games of the match to close out victory in 82 minutes.

Australia is still in medal contention in the women’s doubles competition, with two teams advancing to the quarterfinals for the first time in history.

Ash Barty and Storm Sanders have progressed to the final eight without losing a set, while Ellen Perez and Sam Stosur have showed incredible spirit to win two close matches.

> READ: Barty and Peers to represent Australia in mixed doubles