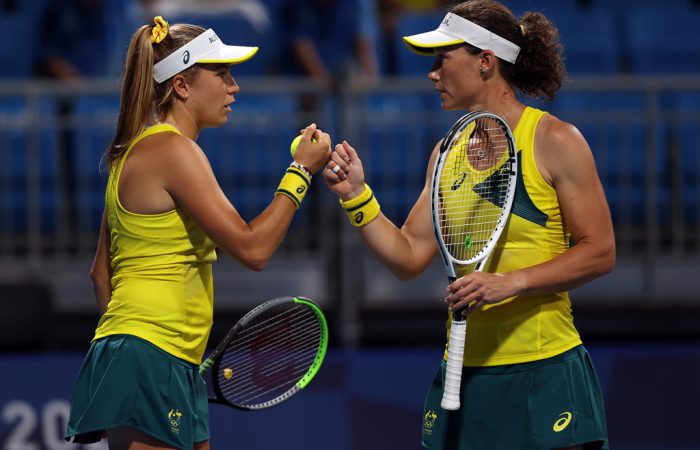 Ash Barty and Storm Sanders subsequently joined their countrywomen in the quarterfinals with a straight-sets winners over Chinese women Yifan Xu and Zhaoxuan Yang.

Perez and Stosur’s 7-6(3) 7-5 victory over Niculescu and Olaru sets up a final-eight showing with either Switzerland’s Belinda Bencic and Viktorija Golubic or Garbine Muguruza and Carla Suarez Navarro of Spain.

The Australian women have so far combined their credentials superbly in Tokyo; the 37-year-old Stosur is a former world No.1 doubles player with six Grand Slam doubles titles while Perez won her second WTA doubles title earlier this season.

After a come-from-behind win over Latvians Jelena Ostapenko and Anastasija Sevastova yesterday, Perez and Stosur clearly grew in confidence in their second match at Arieke Tennis Park.

Niculescu and Olaru took a 5-1 lead before Perez and Stosur sensationally worked their way back, saving seven set points in the first set – two in the ninth game and five in the 12th – to secure the opener in a tiebreak.

After exchanging breaks midway through the second set, Perez and Stosur edged ahead in the 11th and were able to serve out their victory.

“Any time I get to represent Australia it’s a great honour.”

Barty and Sanders are adding another chapter to their long-time friendship with their smooth progress to the quarterfinals.

The Australians took 72 minutes to overcome Xu and Yang 6-4 6-4 in the second round.

They’ll aim to continue progress against either Barbora Krejcikova and Katerina Siniakova – the top seeds and recent Roland Garros champions – or Spaniards Sara Sorribes Tormo in the quarterfinals.

It could mean a second meeting with Sorribes Tormo in a matter of days for Barty, after the Spaniard yesterday shocked the world No.1 Australian in the first round of singles.

Barty had clearly brushed off any disappointment in her superb outing with Sanders; the Australians did not face a break point against the Chinese pair.

Barty and Sanders, by contrast, efficiently converted two of their five break point opportunities– in the seventh game of the first set and fifth game of the second – to progress to the quarterfinal without the loss of a set.

The No.6 seeded Australians dropped just three games against Nao Hibino and Makoto Ninomiya in their opening match.

Earlier today, a determined Ajla Tomljanovic exited in the second round of the singles; Australian men John Millman and Max Purcell were also eliminated in singles.