German Dominik Koepfer scores a straight-sets win against Australia's Max Purcell in the second round of the men's singles competition at the Tokyo 2020 Olympic Games. 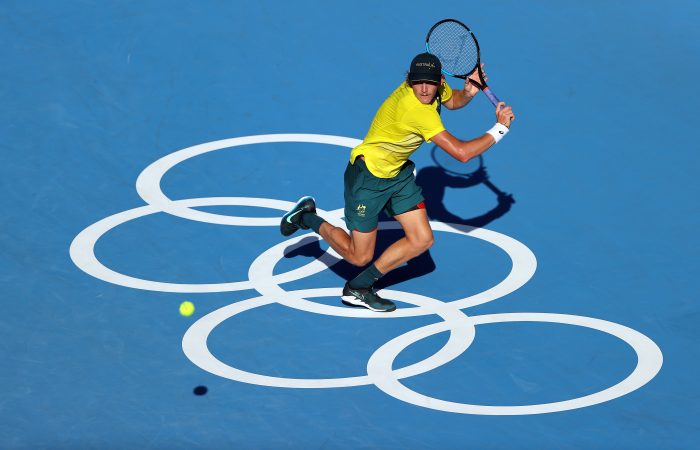 Max Purcell certainly proved how to make the most of a golden opportunity at the Tokyo 2020 Olympic Games.

The 23-year-old was a late addition to the Australian team, replacing world No.18 Alex de Minaur when he tested positive to COVID-19.

Originally only meant to play doubles, Purcell was then handed a last-minute spot in the singles draw when two-time defending champion Andy Murray from Great Britain withdrew just hours before his first-round match yesterday.

The world No.198-ranked Australian made the most of his unexpected chance in singles, scoring a stunning career-best win against world No.15 Felix Auger-Aliassime of Canada.

However, German Dominik Koepfer made sure there won’t be a next chapter in Purcell’s incredible Olympic debut story.

Purcell made a promising start against the powerful left-hander. But after taking a medical timeout for a right shoulder complaint while trailing 3-4 in the opening set, Purcell struggled to compete with the same intensity.

“He played really well. I didn’t really have much to do with it after late in the first set. I guess I was a bit tired, a bit drained and he just played way too well,” Purcell said.

> READ: Millman bows out in second round at Tokyo

It leaves James Duckworth as the last remaining Australian in the men’s singles draw. He plays 12th-seeded Russian Karen Khachanov in the second round tomorrow.

Duckworth is aiming to become the fourth Australian to advance to the men’s singles third round since the reintroduction of tennis as an official Olympic Games sport in 1988. Only Todd Woodbridge (Atlanta 1996), Mark Philippoussis (Atlanta 1996, Sydney 2000) and Lleyton Hewitt (London 2012) have previously progressed to the round of 16.

There was some positive news for the Australian team today, with Sam Stosur and Ellen Perez progressing to the quarterfinals in the women’s doubles competition.

Stosur and Perez scored a 7-6(3) 7-5 victory over Romania’s Monica Niculescu and Raluca Olaru. It is 37-year-old Stosur’s best doubles result in her record five Olympic appearances.

Ash Barty and Storm Sanders also moved into the quarterfinals with a 6-4 6-4 win against China’s Xu Yifan and Yang Zhaoxuan.