Australia's John Millman has been knocked out of the men's singles competition in the second round at the Tokyo 2020 Olympic Games. 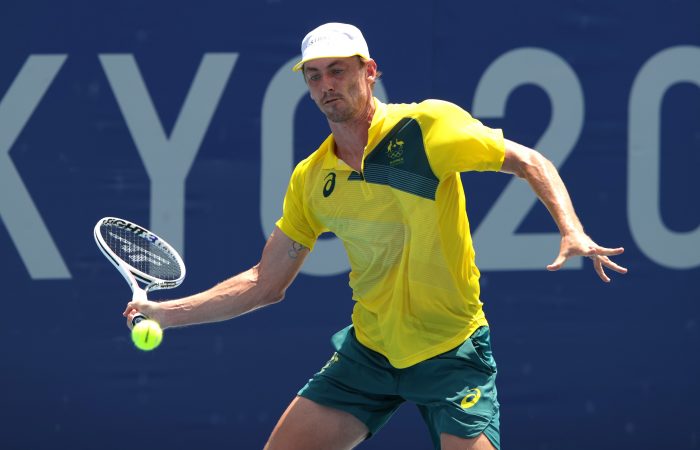 John Millman is one of our nation’s most successful Olympians, joining Mark Philippoussis and Lleyton Hewitt this week as the only Australian tennis players to win men’s singles matches across multiple Olympic Games.

But the world No.44’s Tokyo 2020 campaign has ended with a second-round loss to Spain’s Alejandro Davidovich Fokina.

Although Millman put up an impressive fight, the No.16-seeded Davidovich Fokina prevailed 6-4 6-7(4) 6-3 in a two-hour and 48-minute battle today at the Ariake Tennis Park.

“I would have loved to have won. My opponent is a good player, he is seeded for a reason,” Millman said.

Davidovich Fokina, a 22-year-old who advanced to the Roland Garros quarterfinals earlier this season, dictated play early and hit 14 winners to five in the opening set.

The world No.34 edged ahead again in the second set and served for the match with a 5-4 advantage – but Millman showed his trademark fight to break back.

Get around this, Australia 🇦🇺@johnhmillman was two points away from elimination. Now he's forced a deciding set! #Tokyo2020 | #7Olympics | @TennisAustralia pic.twitter.com/1Gqqzg5Bbi

The 32-year-old Australian then forced the second set into a tiebreak, which he won to level the match at one-set apiece.

Millman couldn’t maintain this building momentum however, with Davidovich Fokina powering ahead early in the deciding set and racing to a 3-0 lead.

The Spaniard had a second chance to serve for the match at 5-1 in the third set, but again, Millman found solutions under pressure. He broke back, then saved two match points on serve to hold and keep the pressure on his younger opponent.

But it proved third time lucky for Davidovich Fokina when having the opportunity to serve for the match, holding firm to secure victory on his fourth match point and setting up a possible third-round clash with world No.1 Novak Djokovic of Serbia.

“I did leave it all out there,” Millman said. “There were a couple of things that maybe could have gone my way, a couple of points here or there in it really. It was just one of those matches that’s a bit of a flip of the coin, he was too good in the end.

“I really enjoyed my Olympics experience. It probably hurts a little bit knowing that time is not on my side. I probably won’t be playing another one (Olympics), that one hurt a little bit as I would have loved to prolong my Games.”

Millman had been aiming to become the fourth Australian to advance to the men’s singles third round since the reintroduction of tennis as an official Olympic Games sport in 1988.