Seven Australians are scheduled to play doubles matches on day six at Wimbledon. 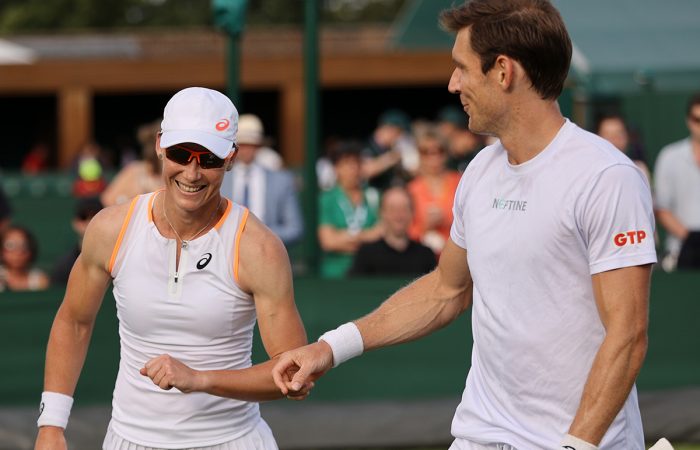 Five Australian players have advanced to the third round in singles at Wimbledon this year – but they are not the only ones enjoying winning runs.

There are also 10 Australian players still alive in the doubles competitions, including seven who are scheduled to play at the All England Club on day six.

Storm Sanders (AUS)/Caroline Dolehide (USA) v Andreea Mitu (ROU)/Monica Niculescu (ROU)
Ladies’ doubles, second round, Court 6, first match (from 8pm AEST)
Sanders is the last remaining Australian in the ladies’ doubles draw. The 26-year-old and American partner Caroline Dolehide made a WTA final at Nottingham in their debut as a team last month. Looking to continue their impressive form, they play Romanian combination Mitu and Niculescu, who eliminated the No.4 seeds in the opening round. Sanders, who is currently ranked at a career-high No.59, is aiming to advance to a Grand Slam third round for the first time.

Alexei Popyrin (AUS)/Lloyd Harris (RSA) v Oliver Marach (AUT)/Aisam-Ul-Haq Qureshi (PAK)
Gentlemen’s doubles, second round, Court 5, second match
This is the second time in 21-year-old Popyrin’s career he has made the second round in a Grand Slam doubles draw and the first time since Australian Open 2019. Popyrin and 24-year-old South African Harris, both making their Wimbledon doubles debuts, face an experienced duo. Marach, 40, is a Grand Slam doubles champion and has been ranked as high as No.2, while 41-year-old Qureshi is a former top 10 player.

Matthew Ebden (AUS)/John-Patrick Smith (AUS) v Ariel Behar (URU)/Gonzalo Escobar (ECU)
Gentlemen’s doubles, second round, Court 15, second match
After saving two match points in an epic first-round battle, Aussie duo Ebden and Smith are now aiming to advance to the third round at Wimbledon for the first time in both of their careers. This is the third time Ebden, a 33-year-old ranked No.70, has made the second round at the All England Club, while 32-year-old Smith, ranked No.73, has reached this stage for a fourth time. Their opponents, Escobar and Behar, are ranked No.52 and No.53 respectively.

Matthew Ebden (AUS)/Sam Stosur (AUS) v [2] Mate Pavic (CRO)/Gabriela Dabrowski (CAN)
Mixed doubles, second round, Court 15, fourth match
All four players in this second-round match are Grand Slam mixed doubles champions. The 37-year-old Stosur has won three major mixed titles, including at Wimbledon in 2008 and 2014, while 33-year-old Ebden won the Australian Open mixed title in 2013. Their second-seeded opponents are the Australian Open 2018 champions and have reached three Grand Slam finals together. Pavic is the world No.1 in doubles, while Dabrowksi is ranked No.11.