Barty battles into Wimbledon third round

World No.1 Ash Barty staves off a determined Anna Blinkova to progress to Wimbledon's third round. 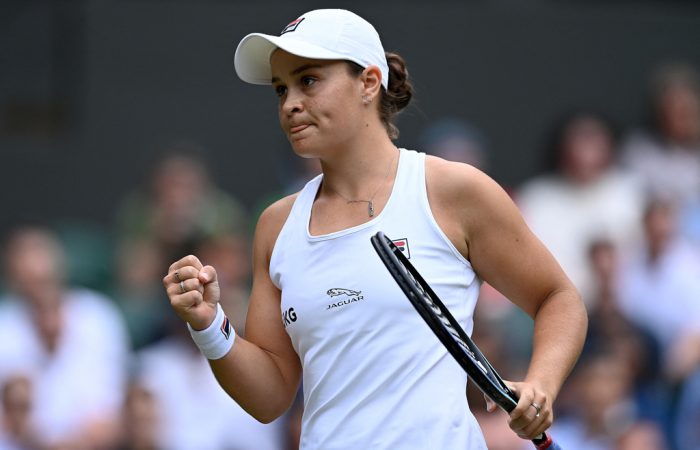 Ahead of her first round at Wimbledon, Ash Barty explained a favourite element of the grass-court Grand Slam.

“I love the learnings,” said the Queenslander. “The tough ones and the good ones that come from every match.”

The education continued for Barty against a determined Anna Blinkova, the world No.1 eventually emerging with a 6-4 6-3 victory.

“She played a great match today,” said Barty, explaining a first career meeting with the Russian required some pre-match homework.

“There were really a few points here and there – it could have been a different story.”

That certainly seemed true early against the world No.89, with all of Barty’s famous problem-solving ability required.

Seeming nerveless in a first outing on the famous Centre Court, Blinkova took a 2-0 lead when Barty dropped her opening service game. While the top-seeded Australian quickly recovered, she worked hard work to gain an advantage.

Barty secured a service break in the eighth game but was unable to consolidate – she finally reeled off two consecutive games to claim the 41-minute first set.

While 11 winners compared to just two for Blinkova were encouraging for Barty, her 18 unforced errors were concerning.

“A few things didn’t feel quite right today, That’s half the battle in sport, is being able to find a way when it’s not feeling all that great,” the No.1 seed conceded.

The second set showcased a more familiar Barty, the Australian striking the first blow as she broke the Blinkova serve in the opening game. Even after Blinkova levelled three games later, Barty’s more free-flowing style had finally emerged.

After breaking serve again in the seventh game, the Australian saved four break points to consolidate. It was the turning point Barty required – she maintained her advantage, forcing a Blinkova error to secure victory after 90 minutes.

“I felt like when my back was against the wall today, I was able to bring the good stuff,” Barty reasoned. “It just wasn’t quite there all the time.”

With her 33 winners equal to her unforced error count, Barty will work hard on the practice court before a third-round meeting with Katerina Siniakova. Still, today’s match marked only a second grass-court encounter for the Australian in two years.

“I’m happy to be able to get through and get another opportunity to play,” said Barty, who is especially delighted to return to a favourite setting.

“Obviously this is a beautiful court – I feel like for me, grass-court tennis is where it’s at. I wish we could play the whole year on it,” she commented. “It’s a traditional surface, I just love it. It felt like a long time, it felt like a long two years. I certainly enjoyed being back out here today.”

Barty was the second Australian to progress on Day Four of the 2021 Championships, James Duckworth earlier claiming a confidence-boosting win over Sam Querrey. There were also wins for Ajla Tomljanovic, Nick Kyrgios and Jordan Thompson in a strong showing for Australian players.