Australia's Jordan Thompson has eliminated No.12 seed Casper Ruud in the opening round at Wimbledon. 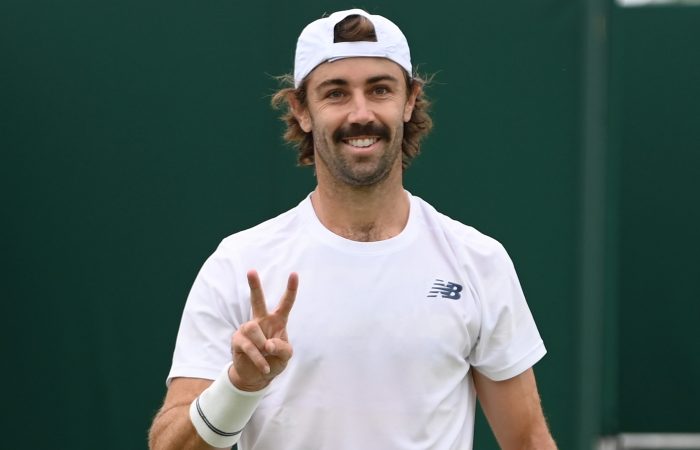 Australia’s Jordan Thompson has scored his first main draw win at Wimbledon – and recorded his biggest Grand Slam victory at the same time.

The 27-year-old began the tournament with a 1-6 career win-loss record against top-20 ranked opponents at Grand Slam level, with his sole win against world No.16 Jack Sock at the US Open in 2017.

But Thompson bettered that achievement today, knocking out world No.14 Casper Ruud in first-round action at the All England Club.

World No.78-ranked Thompson, who had lost in the opening round in his four previous Wimbledon main draw appearances, battled for just over four hours at Court 12.

He showed his determination to stem Ruud’s building momentum in the deciding set and leaped with joy when a misfired smash from Ruud on match point secured the hard-fought victory.

The experienced Japanese player, a quarterfinalist in his past two All England Club appearances, secured a 6-4 6-4 6-4 win against Popyrin in just under two hours.

While the big-serving Popyrin provided glimpses of the talent that has shaped a career-best 2021 season, former world No.4 Nishikori made his experience count. Successfully combining his athleticism with just enough aggression, he secured a first-ever win over Popyrin.

Nishikori had just two more winners than 28 from Popyrin, but timed them superbly. Three of 11 break point opportunities were successfully converted by Nishikori, Popyrin unable to capitalise on any of the seven break points he held.