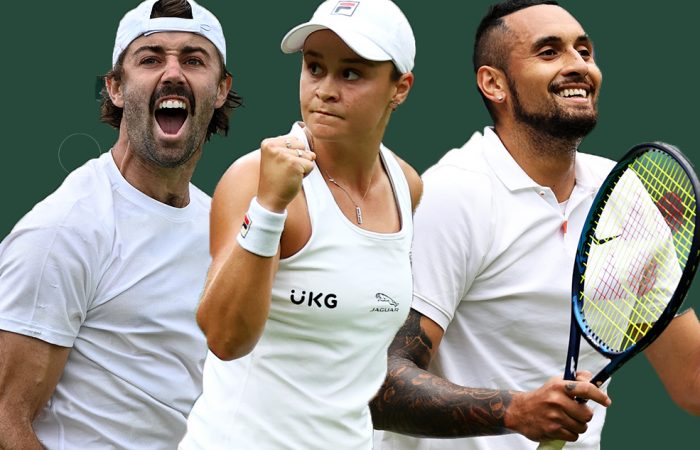 Seven Australian players have advanced to the second round in singles at Wimbledon this year.

It is a great result – but one that hasn’t surprised Nick Kyrgios, the top-ranked Aussie left in the gentlemen’s singles draw.

“There was that window where there wasn’t so many players, and then now we’ve got such good depth,” he said. “It’s incredible to see such success … It’s sick.”

Kyrgios, who is one of five Australian men to advance to the second round, believes Australian players feel comfortable competing on grass courts.

“I definitely think being Australian, growing up on the grass, helps. I played a lot of grass-court matches when I was a junior,” he said. “We have a couple grass courts tournaments in Australia at a young age. I think I developed my grass court game quite early.”

How many can advance to the third round? We’ll find out on an exciting day four at the All England Club.

[Q] Marc Polmans (AUS) v [17] Cristian Garin (CHI)
Gentlemen’s singles, second round, Court 16, first match (from 8pm AEST)
World No.154 Polmans has advanced to the second round at a Grand Slam for the third time in his career and for the first time at Wimbledon. The 24-year-old is now targeting a first major third-round appearance – but standing in his way is world No.20 Garin. They have met at this stage before, with Garin winning in four sets in the second round at last year’s Roland Garros. That, however, was on Garin’s best surface. The 25-year-old is less experienced on grass and scored his first Wimbledon main draw win this week too.
Head-to-head record: Garin leads 1-0
Last meeting: Garin won 6-7(5) 6-2 7-6(3) 6-4  (Roland Garros, October 2020)

[WC] Alex Bolt (AUS) v [29] Cameron Norrie (GBR)
Gentlemen’s singles, second round, No.1 Court, first match (from 10pm AEST)
Riding the momentum of an eight-match winning streak, world No.149 Bolt is excited to face British hope Norrie in the second round. “Playing on the grass courts of Wimbledon is something you always dream about,” Bolt said after scoring his fourth career top-50 win in the opening round. “Hopefully I can keep the run going.” The No.34-ranked Norrie is in career-best form. The 25-year-old was a Queen’s finalist two weeks ago and has halved his ranking this season.
Head-to-head record: Bolt leads 1-0
Last meeting: Bolt won 7-5 4-6 6-4 (Surbiton, June 2015)

[1] Ash Barty (AUS) v Anna Blinkova (RUS)
Ladies’ singles, second round, Centre Court, first match (from 10.30pm AEST)
Although world No.1 Barty entered the tournament under an injury cloud, she showed no signs of a hip complaint in her first-round win. “To be able to play here, you do absolutely anything,” said Barty, noting the importance of the tournament. “You bend over backwards to make sure you can prepare yourself in a way that you can experience Wimbledon.” Today the 25-year-old faces Russian Blinkova – a 22-year-old ranked No.89 and looking to advance to the third round at the All England Club for the first time.
Head-to-head record: First career meeting

James Duckworth (AUS) v Sam Querrey (USA)
Gentlemen’s singles, second round, Court 12, second match
Duckworth, who has an 0-7 win-loss record in Grand Slam second-round matches, has his sights on a career-best Grand Slam result. But to make the third round, the 29-year-old must defeat a big-serving American with an incredible record at the All England Club. The No.54-ranked Querrey is a three-time Wimbledon quarterfinalist, who has twice beaten the top seed at the tournament (Djokovic in 2016, Murray in 2017). The No.91-ranked Duckworth did test 33-year-old Querrey when they played a couple of weeks ago.
Head-to-head record: Querrey leads 1-0
Last meeting: Querrey won 6-4 7-6(7) (Stuttgart, June 2021)

Jordan Thompson (AUS) v Kei Nishikori (JPN)
Gentlemen’s singles, second round, Court 18, second match
After defeating world No.14 Casper Ruud in a five-set battle in the opening round, the draw does not get any easier for Thompson. The 27-year-old now plays former world No.4 and two-time Wimbledon quarterfinalist Nishikori. The 31-year-old Japanese player, who is currently ranked No.53, eliminated Australia’s Alexei Popyrin in the first round. Thompson, who is ranked No.78, is already enjoying a career-best run at the tournament. “I was very proud of myself,” he said after scoring his biggest Grand Slam win yesterday.
Head-to-head record: Nishikori leads 1-0
Last meeting: Nishikori won 6-1 6-1 (Brisbane, January 2017)

Ajla Tomljanovic (AUS) v Alize Cornet (FRA)
Ladies’ singles, second round, Court 14, third match
The 28-year-old Tomljanovic is attempting to snap a 10-match losing streak in the second round of major tournaments. The world No.75, who last progressed beyond a Grand Slam second round in 2014, plays 31-year-old Cornet. The No.58-ranked Frenchwoman is in impressive form, eliminating fifth seed Bianca Andreescu in the opening round. This is their second career meeting in the second round of a Grand Slam. Eight years ago, Cornet defeated Tomljanovic at this stage at the US Open.
Head-to-head record: Cornet leads 2-1
Last meeting: Cornet won 5-7 6-1 6-3 (Melbourne, February 2021)

Nick Kyrgios (AUS) v Gianluca Mager (ITA)
Gentlemen’s singles, second round, No.3 Court, fourth match
Kyrgios proved he could be a title contender with a stirring first-round victory against No.21 seed Ugo Humbert. The world No.60’s next opponent is a 26-year-old Italian ranked No.77, who is looking to advance to the third round at a major for a first time.  Kyrgios, also 26, is feeling confident. “I know my game, I know how to play on grass. I’m not scared of anyone in the draw. I know if I believe and I’m feeling good mentally, like, I know what I’m capable of,” Kyrgios said. “I’m going to serve big and play big, and just compete.”
Head-to-head record: First career meeting