Australia's Nick Kyrgios will return to court at Wimbledon tomorrow to try and close out a five-set victory against world No.25 Ugo Humbert. 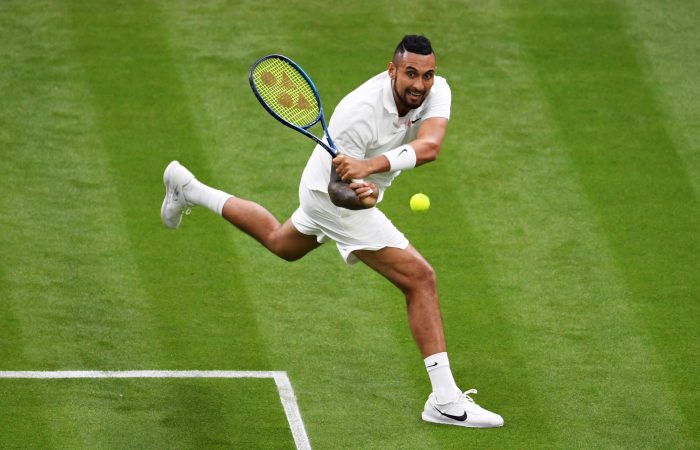 Nick Kyrgios declared “no one here wanted to play me first round” on the eve of Wimbledon – and he proved why today.

The Australian, making his first competitive appearance since the Australian Open in February, has taken No.21 seed Ugo Humbert to five sets in their opening-round clash.

It has been a thrilling contest so far, full of momentum swings and sensational shot-making.

The 26-year-old Kyrgios picked up exactly where he left off, producing entertaining tennis on the Grand Slam stage. The world No.60-ranked Australian struck eight winners and recorded no unforced errors in a sublime fourth set, igniting the Court No.1 crowd with his fight.

This is a rematch of a five-set Australian Open 2021 second-round showdown, where Kyrgios fought back from a two-sets-to-one deficit to save two match points and beat Humbert.

“I’d had a hell of a grass-court season but it’s a bittersweet ending,” conceded Australia’s No.1-ranked man. “Once I have some time, I’m sure I’ll be able to look back and be happy with my efforts over the season but this is the week that I wanted to go deep, and it’s a shame.”

Chris O’Connell is locked in a five-set battle too against No.17 seed Gael Monfils. Their first-round clash was suspended, due to slippery conditions, with Monfils leading 3-2 in the deciding set.