Bolt charges into Wimbledon second round 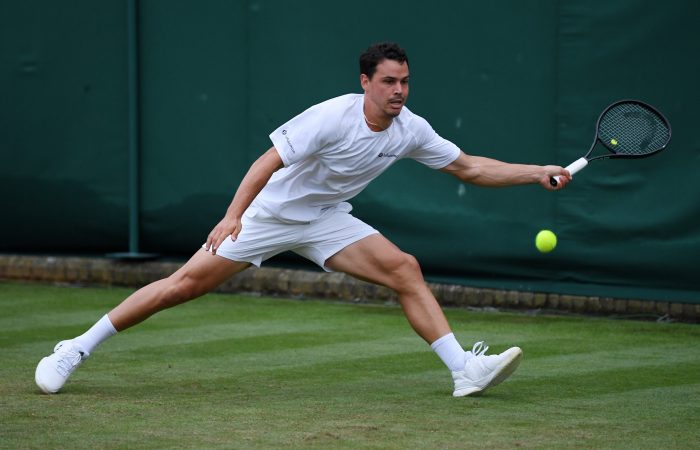 The 28-year-old South Australian, who earned a wildcard after winning seven consecutive matches to claim an ATP Challenger title as a qualifier in Nottingham earlier this month, scored a 7-6(5) 6-4 7-5 victory against world No.44 Filip Krajinovic in first-round action today.

It was a confident performance from the world No.149, striking 41 winners and only 21 unforced errors to outplay the 29-year-old Serbian.

This is the fourth top-50 win of Bolt’s career and his first since Australian Open 2020.

Bolt now plays either No.29-seeded Brit Cameron Norrie or former world No.10 Lucas Pouille of France in the second round.

Earlier today, world No.1 Ash Barty made a winning start to her Wimbledon campaign with a three-set victory against former world No.6 Carla Suarez Navarro.

Qualifer Marc Polmans has also progressed to the second round, making a perfect Wimbledon debut to defeat 2010 quarterfinalist Yen-Hsun Lu.

The No.15 seed entered the tournament in red-hot form, having won his fifth career ATP singles title in Eastbourne last week. However, he was unable to continue that momentum and lost in four sets.

Chris O’Connell’s first-round match against No.13 seed Gael Monfils has extended to a third day. The match resumed with a third-set tiebreak today, but play was suspended again in the fifth set due to slippery conditions.

Nick Kyrgios was also locked in a five-set battle when his first-round match against No.21 seed Ugo Humbert was suspended.

With rain interrupting play again, first-round matches for James Duckworth, Ajla Tomljanovic and Ellen Perez were all rescheduled for tomorrow.