Australia's John Millman scores his biggest win on grass in five years to move into the second round at an ATP tournament in London. 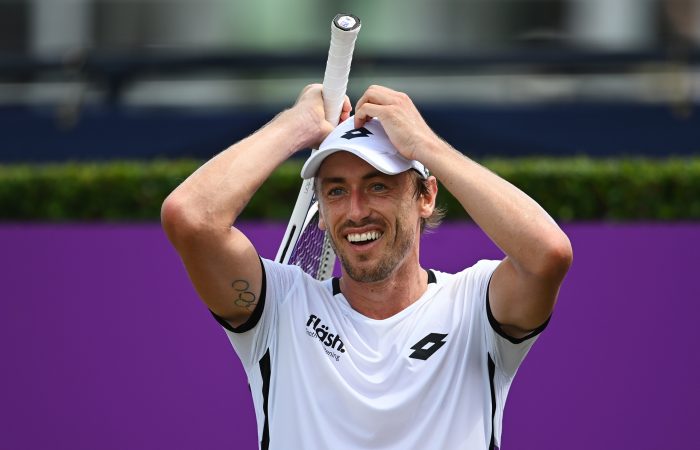 John Millman has scored a hard-fought opening-round win at an ATP 500 tournament at Queen’s Club in London.

It is the highest-ranked opponent that Millman has defeated on grass since Wimbledon 2016, when he beat world No.23 Benoit Paire in the second round.

It is also marks a successful return from a back injury for Millman, who withdrew from recent events at Roland Garros and Stuttgart.

Millman could potentially play compatriot Alex de Minaur in the second round, should the fourth-seeded Aussie defeat Serbia’s Laslo Djere in the opening round.

De Minaur made a winning start to the tournament, teaming with Brit Cameron Norrie to advance to the second round in doubles.

Jordan Thompson is through to the second round at an ATP 500 tournament in Halle.

The 27-year-old Australian scored a 6-2 7-6(4) victory against German wildcard Daniel Altmaier, losing only nine points on serve and not facing a break point in the 97-minute match.

Thompson plays a Russian in the second round – either fourth seed Andrey Rublev or Karen Khachanov, who are scheduled to play their first-round match tonight.

Czech qualifier Tereza Martincova has spoiled Sam Stosur’s tour return, scoring a 6-3 6-4 victory against the Australian in the opening round of a WTA 250 tournament in Birmingham.

Stosur, who is playing her first tour event since the Adelaide International in February, now turns her attention to doubles where she is teaming with American Coco Vandeweghe.