Ash Barty out of Roland Garros

A hip injury has forced Ash Barty to retire during her second-round match in Paris. 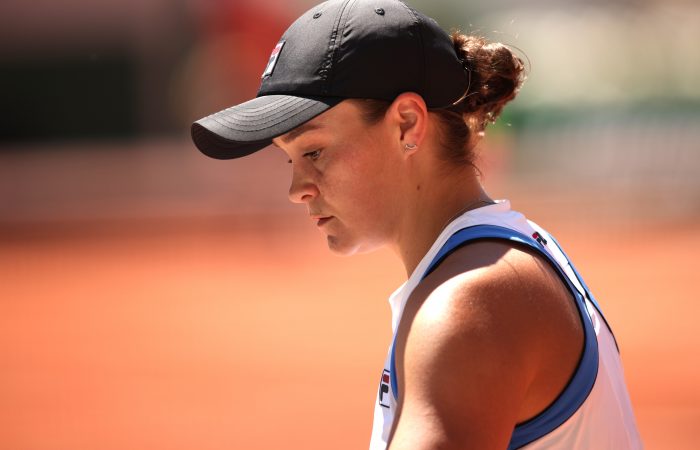 Injury has derailed the world No.1’s tournament, forcing Barty to retire mid-match during her second-round clash against Poland’s Magda Linette in Paris today.

Linette was leading 6-1 2-2 when Barty, who was struggling with a hip injury, made the decision not to continue.

BREAKING NEWS: Ash Barty out of #RolandGarros after retiring hurt 😢

Every Match. Every Court. Ad-Free. Live and On Demand on @StanSportAU.#9WWOS pic.twitter.com/5Iav4XaxPj

The 25-year-old Australian was clearly hampered by injury. She uncharacteristically hit 14 unforced errors in the opening set and lacked confidence on serve.

Barty received an off-court medical timeout after the first set, but despite her best efforts to find a way to compete, she conceded after 48 minutes on court.

“Right from the first game I was battling the pain, and it just became too severe, was becoming unsafe,” Barty said of her decision.

Barty revealed she suffered the acute injury just days before her opening match in Paris.

“We did everything, absolutely everything we could to give myself a chance. And, you know, it was a small miracle that we were able to get on court for that first round,” she admitted.

“Today it was no better and getting worse again.”

It is only the fourth time in Barty’s career that she has retired mid-match and a first time at Grand Slam level.

“It’s heartbreaking. We have had such a brilliant clay court season,” Barty said.

“It’s disappointing to end like this. I’ve had my fair share of tears this week. It’s all good. Everything happens for a reason. There will be a silver lining in this eventually. Once I find out what that is, it’ll make me feel a little bit better, but it will be there, I’m sure.”

It is the earliest Grand Slam exit in three years for Barty, who was the first top-seeded Australian woman in Paris since Margaret Court in 1973.

World No.45 Linette moves into the third round, matching her career-best result in Paris. She plays No.25 seed Ons Jabeur next, who eliminated Australia’s Astra Sharma in second-round action earlier today.

Jabeur scored a 6-2 6-4 victory against the world No.124, avenging a loss in the Charleston final in April.

Sharma showed some fight down 2-5 in the second set, breaking Jabeur’s serve for the first time in the match. But it wasn’t enough to prevent Jabeur from sealing victory in 64 minutes.

“She came out playing really well. I thought she executed some pretty difficult shots,” 25-year-old Sharma said. “I definitely was a bit on the back foot and not dictating enough and not pressing her, so yeah, too good. She just was the more offensive player today.”

Fortunately, there was better news for Australian players in doubles.

John Peers and New Zealand’s Michael Venus advanced to the second round with a three-set victory against French wildcards Benjamin Bonzi and Antoine Hoang.

While All-Aussie duo Max Purcell and Luke Saville are through to the third round after scoring a three-set win against No.15 seeds Ben McLachlan of Japan and Raven Klaasen of South Africa.