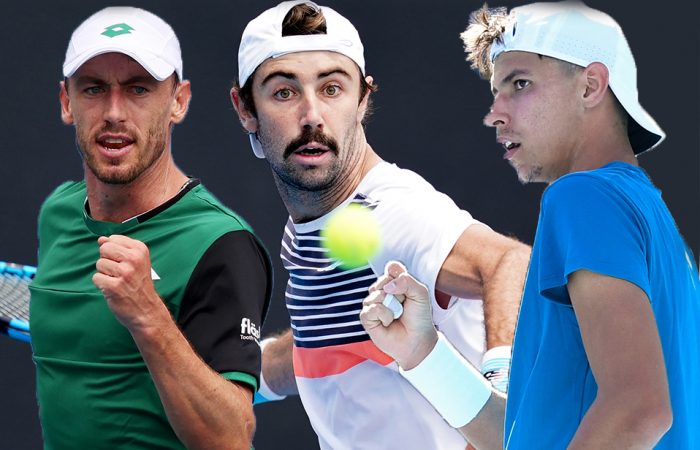 It has been 52 years since an Australian man won the Roland Garros singles title. Can one of these six Aussie contenders follow in the footsteps of Rod Laver’s 1969 victory and triumph on the red clay in Paris this year?

[21] Alex de Minaur, 22, New South Wales
Since winning his fourth career ATP title in the opening week of the season, De Minaur has struggled with consistency. His season win-loss record stands at 11-10 and is 3-4 on clay. But there’s no questioning the world No.22’s heart ahead of his fifth Roland Garros appearance, where he is seeded for a third consecutive year. De Minaur’s never-say-die attitude always makes him a threat. His first-round opponent is world No.78 Stefano Travaglia. De Minaur defeated the 29-year-old Italian last year in their only previous career meeting.
Roland Garros career record: 1-4
Roland Garros best result: Second round (2019)

John Millman, 31, Queensland
The Roland Garros draw has never been kind to Millman, pitting him against seeded opponents in the opening round in each of the past five years. The world No.43 returns looking to score his first main-draw victory in Paris – and this time, his draw is not as harsh. Millman has been pitted against world No.87 Gianluca Mager in the first round, which will be his first career meeting with the 26-year-old Italian. Millman carries extra confidence into the tournament too, having won more matches on clay this season (seven) than any previous year.
Roland Garros career record: 0-5
Roland Garros best result: First round (2016, 2017, 2018, 2019, 2020)

Alexei Popyrin, 21, New South Wales
Popyrin created history as a 17-year-old at Roland Garros 2017, becoming the first Australian to win the boys’ singles title in 49 years. Making his third main draw appearance, the world No.63 returns in career-best form. He won his first ATP singles title in February and has built a 19-9 win-loss record for the season. However, his first-round opponent boasts the most successful Roland Garros record in history. Popyrin plays third seed and 13-time champion Rafael Nadal, who has won 100 of his 102 career matches in Paris. Nadal beat Popyrin in straight sets in Madrid earlier this month in their first meeting.
Roland Garros career record: 1-2
Roland Garros best result: Second round (2019)

Jordan Thompson, 27, New South Wales
Clay might not be Thompson’s favourite surface, but he’s known for giving his all every time he steps on court. He has enjoyed success in Paris too, advancing to the third round in 2019. For the patriotic world No.64, who has the Australian coat of arms tattooed on his bicep, the need to perform strongly to keep his hopes alive of qualifying for the Olympic Games provides added incentive. Thompson meets world No.72 Jaume Munar in the first round. It will be his first meeting against the 24-year-old Spaniard, who lists clay as his best surface and trains at the Rafa Nadal Academy.
Roland Garros career record: 3-5
Roland Garros best result: Third round (2019)

James Duckworth, 29, New South Wales
Roland Garros is the only major where Duckworth is yet to win a main draw match. Can he snap a five-match losing streak in Paris this year? The world No.101 scored his first top-20 win earlier this season, defeating world No.13 David Goffin in Miami. After a short training block at home in Brisbane, a refreshed Duckworth returns to the tour determined to keep building on this form. He plays world No.82 Salvatore Caruso in the first round. The 28-year-old Italian defeated Duckworth in four sets at last year’s US Open, which is their only previous meeting.
Roland Garros career record: 0-5
Roland Garros best result: First round (2013, 2014, 2015, 2018, 2020)

[WC] Chris O’Connell, 26, New South Wales
Hard work is paying off for O’Connell, a wildcard entry who is set to make his Roland Garros main draw debut. The world No.129 has proved he can compete with the world’s best, advancing to the second round at both the most recent US Open and Australian Open. Returning from a recent ankle injury setback, he is determined to now make his mark in Paris. World No.52 Tommy Paul is his first-round opponent. O’Connell won his only previous meeting against the 24-year-old American, who claimed the Roland Garros boys’ singles title in 2015.
Roland Garros career record: 0-0
Roland Garros best result: Making debut