Maddison Inglis has continued her winning run at the Adelaide International, overcoming Australian compatriot Sam Stosur in a three-set battle. 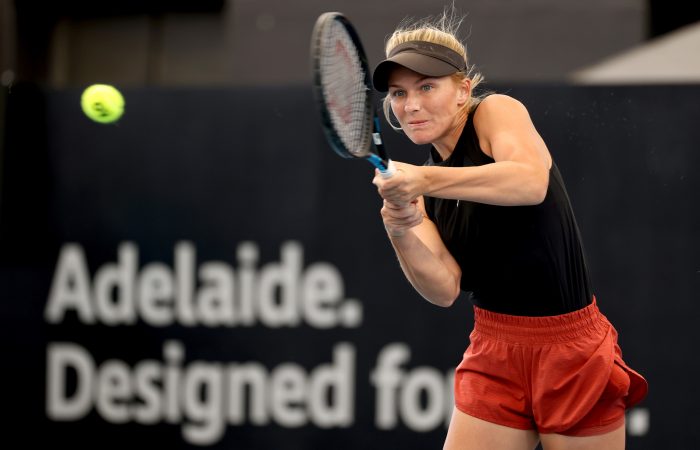 Maddison Inglis is through to the second round at the Adelaide International.

Inglis rises to the 🔝

🇦🇺 Maddison Inglis overcomes a gallant Sam Stosur 5-7 7-5 6-4 to advance to the second round.

The No.136-ranked Inglis started well, building an early lead. The 23-year-old, who qualified for a WTA event for the first time in her career this week, served for the opening set at 5-4.

But Stosur’s experience shone in the final stages of the set, stepping up to break Inglis’ serve to love and win the final three games.

Games went on serve in the second set, with Inglis refusing to let Stosur build on her first-set momentum.

Inglis earned six break points in the 11th game, but could not convert. Stosur saved two of them with aces and another two with winners. On her seventh break point opportunity in that game, Inglis finally broke when Stosur fired a forehand wide.

This time Inglis didn’t falter when trying to serve out a set and levelled the match.

Stosur returned from an off-court medical timeout with her left thigh strapped. Determined to shorten points, a physically hampered Stosur was stepping in and playing more aggressive in the deciding set. It proved an effective tactic, helping her race to a 3-0 lead.

Inglis withstood the challenge though. On her serve at 3-4, 15-40 she looked in trouble, but reeled off eight points in a row to take the lead. From there, the Western Australian closed out victory after two hours and 46 minutes on court.

It was a gallant effort from Stosur, who has only retired mid-match with injury three times in her 1000 plus professional matches on tour.

“I’m obviously stoked to get the win. I could see Sam wasn’t 100 per cent in the third set, so I hope everything is okay with her,” Inglis said. “I think I got a bit lucky in the end there, but it is pretty special to play against Sam. She was an idol for me growing up and someone I’ve always looked up to, so to be on the same court with her was a really cool experience.”

This is Inglis’ second career main draw win at WTA level and her first win against a Grand Slam champion.

Inglis now plays fifth seed and world No.18 Iga Swiatek in the second round. The 19-year-old from Poland is also a Grand Slam champion, winning Roland Garros last year.

“I’ve never played Iga before, but she’s obviously an amazing player,” Inglis said. “I’m going to go out and enjoy it, just have some fun.”

> READ: Sanders scores one of her biggest career wins