For the first time in 29 years, two all-Australian teams have progressed to the Australian Open mixed doubles semifinals. 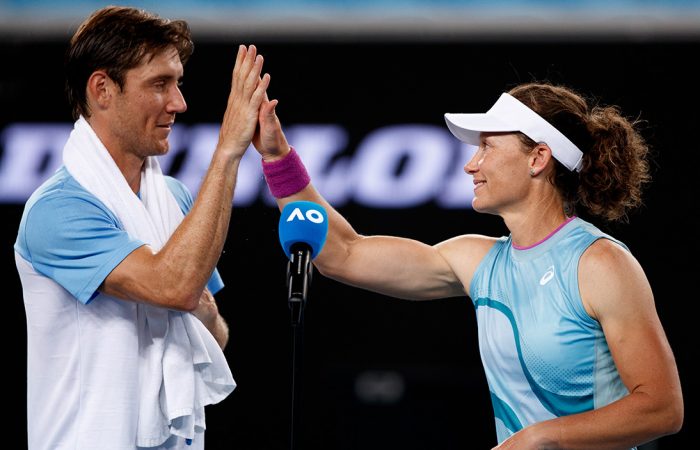 The wildcard pairing are yet to drop a set this tournament, continuing their impressive run with a convincing 6-3 6-2 victory against Belgian Sander Gille and American Hayley Carter in the quarterfinals at Rod Laver Arena today.

“Today was even better with some people in the stands making it exciting. I think mixed doubles is about having fun, enjoying it. When there’s people there trying to entertain, it’s much better than playing in front of no one. I think we both enjoyed being out there.”

A dominant display from @bambamsam30/@mattebden.

The Aussie wildcards advance to the mixed doubles semifinals with a 6-3 6-2 win over Carter/Gille.#AusOpen | #AO2021 pic.twitter.com/5lKedlBm3t

The Aussie wildcards made a strong start, racing to a 3-0 lead. But they couldn’t maintain that early momentum, losing the next three games.

Breaking Carter’s serve in the eighth game, the Aussies edged ahead once again. Ebden then served out a 31-minute opening set.

The Aussie duo snared an early break in the second set and with their confidence growing, moved ahead 3-1.

There was no stopping Ebden and Stosur, who broke again in the seventh game and then served out victory after exactly an hour on court.

“We were pumped to go out there,” Ebden said of playing at Rod Laver Arena. “To come here and do it in front of some fans, play well with Sam, it’s just a joy really.”

This is the fourth time in Stosur’s career she has reached an Australian Open mixed doubles semifinal, having also advanced to this stage in 2005, 2006 and 2017. The 36-year-old shared the 2005 title with Australian Scott Draper.

The 33-year-old Ebden is through to his third Australian Open mixed doubles semifinal, having also made the final four in 2013 and 2014 alongside Aussie Jarmila Wolfe (nee Gajdosova). They won the title in 2013.

With Australian duo Marc Polmans and Storm Sanders also progressing to the semifinals, it marks the first time two all-Australian teams have reached this stage in an Australian Open mixed doubles draw since 1992.

The American-Czech combination recorded a 6-3 6-3 semifinal victory at Margaret Court Arena this afternoon to extend their winning streak as a team at Melbourne Park to nine matches.

> READ: Aussie mates Polmans and Sanders – winning and having fun