Matthew Ebden and John-Patrick Smith's winning run in the Australian Open 2021 men's doubles draw has ended in the quarterfinals. 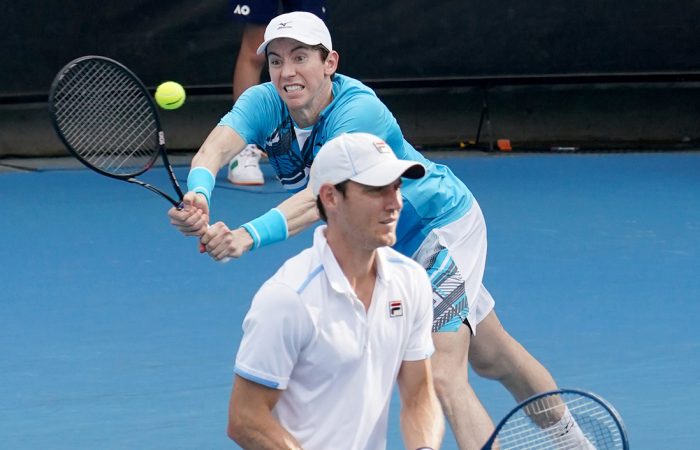 Australian duo Matthew Ebden and John-Patrick Smith were enjoying a magical run at Australian Open 2021 – but it came to an end in the men’s doubles quarterfinals today.

Ninth seeds Ivan Dodig of Croatia and Filip Polasek of Slovakia recorded a hard-fought 6-4 2-6 6-4 victory against the Aussie wildcards at Melbourne Park.

The Australian combination hit 31 winners and only 11 unforced errors in their quarterfinal match, but were just edged out in a one-hour and 50-minute battle.

“Today was a tough match, the guys played very well. It was just a few balls difference,” World No.17 Polasek admitted.

It concludes a career-best Australian Open run for the 33-year-old Ebden and 32-year-old Smith, who had never previously progressed beyond the men’s doubles second round at their home Grand Slam.

World No.109 Ebden entered the tournament with a 1-11 career win-loss record in Australian Open men’s doubles draws, winning his only previous match in 2017. World No.96 Smith’s record was similar at 2-9, with second-round appearances in 2013 and 2015 his best results.

Their sensational 2021 winning run included victories against the No.15 seeds and 2020 finalists Max Purcell and Luke Saville in the second round, as well as No.4 seeds Wesley Koolhof and Lukasz Kubot in the third round.

The tournament is not over yet for Ebden, who is still alive in the mixed doubles draw with fellow Australian Sam Stosur.