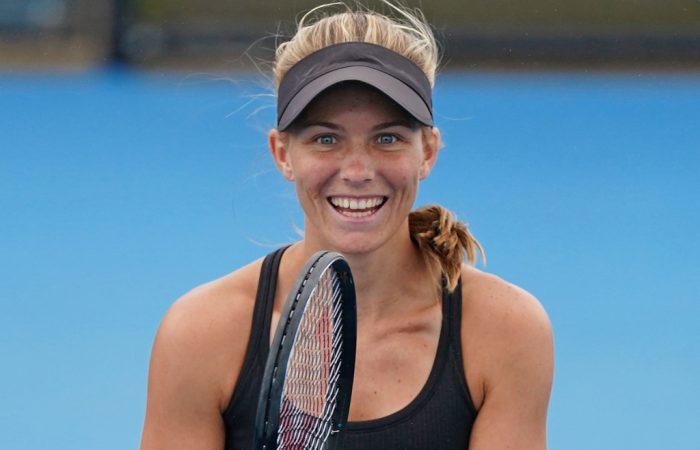 There were conflicting responses for Maddison Inglis when professional tennis events were abruptly halted in March last year.

On the one hand, the 23-year-old was robbed of the momentum of 10 straight match wins, in which she’d claimed consecutive Pro Tour titles in Burnie and Perth, subsequently climbing to a career-high world No.112 ranking.

On the other, at least Inglis was in that winning position. “It is a good way to stop, I guess. Feeling good and know that you’ve been playing well,” she told tennis.com.au during a practice break ahead of the Australian Open.

That the most positive train of thought would eventually dominate is no surprise for those close to Inglis.

Born and raised in Perth but now based in Brisbane – where fellow professionals Lizette Cabrera, Priscilla Hon and Kimberly Birrell are both close friends and valuable training partners – Inglis is warmly regarded within Australian tennis circles.

When she returned to her family in Perth during the first pandemic-enforced lockdowns, Inglis was accompanied by her tennis-playing boyfriend Jason Kubler.

“I kind of thought that we don’t get much time at home, so I’m going to make the most of that,” she related.

“I got three months at home, which was amazing. and I think it was a real reboot, something that I needed. To be with family during such an uncertain and scary time around the world, was really important.”

Taking time to pursue activities such as yoga was equally valuable, Inglis emerging from that period with a refreshing outlook.

“Everything is changing every day or every week and you just have to learn how to adapt to the new situation and kind of not get too stressed about anything, just take it as it is,” she commented.

“I think I’ve learnt a lot of patience and a lot of adaptability this past year.”

It was the perfect frame of mind to return to a competitive setting, Inglis doing so via the UTR Pro Tennis Series, where she claimed back-to-back titles in Brisbane.

“They were perfect. We were really, really lucky to have those,” she related. “It was amazing to have something to train for and something to work and get up for every day, because it was a bit hard sometimes when you’re not playing at all.”

“To get so many matches in lockdown was so important.”

That was particularly true as Inglis prepared for her long-awaited debut at the US Open and Roland Garros.

While bowing out to seeded opponents on both occasions – No.24 Magda Linette in New York and No.27 Ekaterina Alexandrova in Paris – contesting those events was another important step in the West Australian’s overall tennis development.

“It was obviously an awesome opportunity to play two Grand Slams,” said Inglis.  “I was very lucky to be able to do that.”

The world No.130 feels similarly blessed to contest Australian Open 2021, Inglis granted a wildcard after her impressive progress in the difficult last season.

“I’m really excited. It’s been a long time coming,” said Inglis, whose only other main draw Australian Open was in 2016, after winning the AO Wildcard Play-off as a 17-year-old.