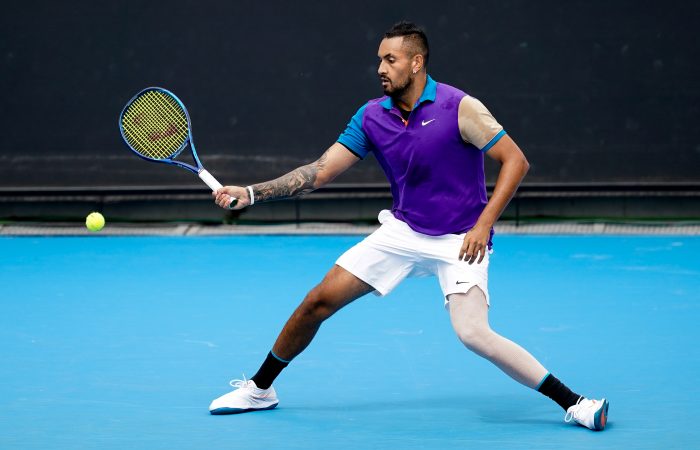 It has been a day to forget for Australian players at the Murray River Open, with Nick Kyrgios, James Duckworth, Alex Bolt and Alexei Popyrin all losing their third-round matches at the Melbourne Summer Series event at Melbourne Park.

All now turn their attention to next week’s Australian Open, where they have been handed contrasting fortunes in the draw.

Kyrgios struggled with a knee injury in his loss to world No.25 Borna Coric, but took positives out of his performances this week.

“I’m relatively happy where my game’s at. Obviously I wasn’t expecting much this week. Just to be back out there was a positive,” said Kyrgios, who was competing in his first tour-level event in 11 months.

“I’m not disappointed at all. I played three matches this week, which is exactly what I needed. Now I’ve got a couple days, three or four or five days to just relax a little bit, fine-tune a couple things, then see how it goes in the Aus Open.”

Kyrgios is confident he will be fit for next week’s Grand Slam tournament.

“It’s pretty sore. I was kind of expecting that. I haven’t played in a year,” he said of his left knee. “I was expecting my body to not feel great, to be honest. I’m not at all scared or anything that I won’t play or anything like that. I’m just going to maintain my body now.”

A disappointed Duckworth was left to rue missed opportunities in his loss to Frenchman Corentin Moutet. The Aussie held early leads in both sets, and even a set point in the opening set, before losing 7-6(4) 6-4.

Bolt, similarly, had his opportunities against top seed Stan Wawrinka.

Bolt served for the match at 5-4 in the deciding set, but was broken. Wawrinka proved why he’s a three-time Grand Slam champion, closing out a hard-fought victory in a tense deciding tiebreak.

The 21-year-old Popyrin put up a strong fight, breaking the world No.19 as he served for the match at 5-4 in the second set.

This proved a pivotal change in momentum, with Popyrin then taking the second set in a tiebreak.

However, Dimitrov quickly wrested back control in the third set to race ahead 5-0. Popyrin kept challenging, saving five match points before the Australian Open 2017 semifinalist sealed a 6-4 6-7(5) 6-3 victory.