Team Spain score a 3-0 victory against Team Australia on the opening night of the 2021 ATP Cup competition at Melbourne Park. 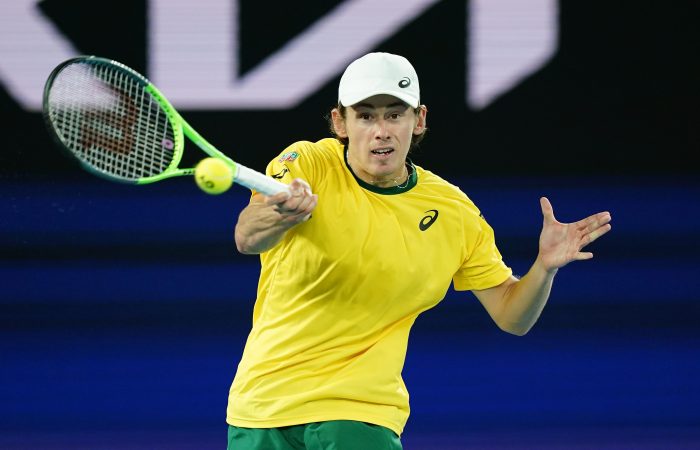 Australia’s hopes of winning the ATP Cup have been dealt an early blow, with Team Spain recording a 3-0 victory in their opening round-robin match tonight.

A much-hyped showdown between Alex de Minaur and Rafael Nadal did not eventuate, with the world No.2 sitting out the round-robin tie with back stiffness.

“We found out just before, we just finished our warm-up basically, that Rafa wasn’t going to play. So that obviously changed our thinking with who the boys were up against and their focus obviously had to change, tactics and how they’re going to play.”

Pablo Carreno Busta got Team Spain off to a winning start, recording a 6-2 6-4 victory against John Millman.

“Carreno Busta was hitting the ball like a dream the whole match,” Hewitt said. “(He) looked very comfortable on the hard court out there. Johnny had a couple of chances there, (but) wasn’t quite able to take it.”

Millman joked with media that he wished he had slipped laxatives into the world No.16’s drink before the match.

“He was really good today. You’ve got to give credit where credit is due,” the Australian conceded.

Alex de Minaur started strongly against world No.13 Roberto Bautista Agut in the second singles match, but the Spaniard closed out a 4-6 6-4 6-4 win.

“First match of the Aussie summer. So, look, it’s always a bit of added nerves and pressure, but happy I was able to bring a high level today,” De Minaur said of the positives he would take from the loss. “(I) wasn’t able to sustain it as much as I wanted to, but, hey, it’s work in progress.”

Carreno Busta returned in doubles, partnering world No.11 Marcel Granollers. The duo recorded a 6-4 7-5 win against Australians John Peers and Luke Saville to secure a clean sweep for Team Spain.

Team Australia plays its final round-robin match against Team Greece tomorrow, needing victory to keep its slim chances alive of progressing through to the semifinals.

“I feel like today I was able to kind of, in a way, dust a bit of the nerves, cobwebs off and I’ll be ready to go tomorrow. Hopefully I can bring it,” De Minaur said of this likely clash with world No.6 Stefanos Tsitsipas.