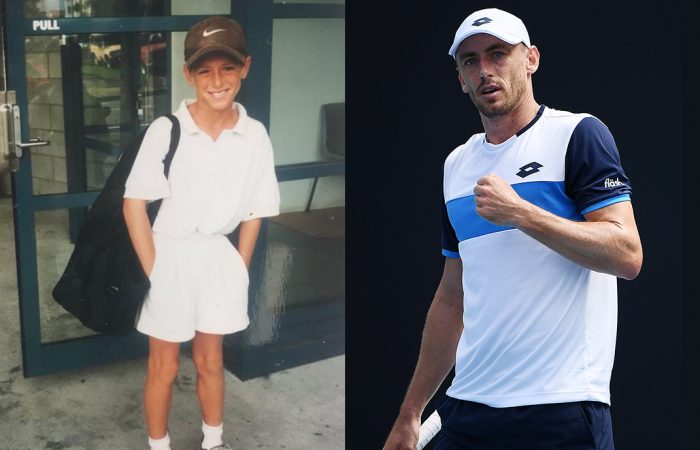 A Hills Hoist, a coat hanger, newspaper and his mum’s old stockings was how John Millman first experienced tennis.

“Mum would hang up stockings on the clothes line and in the stockings would be scrunched up balls of newspaper. She’d also cover a clothes hanger in a stocking, so you’d have a little stocking racquet to hit the hanging stockings with,” Millman recalled in a Tennis Australia Facebook Live interview in 2020.

Millman, who grew up in Brisbane, began proper tennis lessons at age four. His three older sisters played and he was determined to follow in their footsteps.

“I was watching my sisters go out and hit balls at 6am every Saturday morning at Laff’s Tennis Centre,” Millman said.

His first coach was Ken Laver, a relative of Australian legend Rod Laver.

“John holds the honour of being the youngest child to ever play in our junior fixtures. He was four-and-a-half when he started playing full court junior fixtures, which was before the days of the ANZ Tennis Hot Shots program,” Laffey said.

“John was very competitive. He just hated being beaten. But because he was so young, everyone he played was older and stronger than him.”

Determined to improve, Millman spent hours as a junior hitting with an old ball machine that was a gift from Laffey.

He would rush home after school each day, push the heavy machine down a hill to the family’s backyard tennis court and set up six extension cords to operate it.

“I’d just hit balls for hours with no one on the court with me,” Millman recalled.

“You can see how that’s influenced my game style today. I probably should have spent a bit more time at the net.”

As he honed his on-court skills, the ultra-competitive Millman also learned valuable life lessons in his formative years.

Admitting he was a ‘big crier’ as a junior, Millman recalls Laffey putting a stop to such behaviour.

“I remember Ken ringing up on the landline when I was eight years old and saying ‘if you cry in this tournament, you’re going to have to have a break from tennis for a bit’,” Millman said.

“The only thing worse than losing, was not being able to play tennis.”

Millman credits his parents, who had asked Laffey to call, for teaching him the importance of sportsmanship.

“My Mum and Dad instilled in me from a very young age that competition is important and you’ve got to love to compete, but first and foremost you’ve got to be a good person, respect the game, respect your opponent and conduct yourself in a good manner,” he said.

“It’s tough for an eight year old to have those qualities, they have to learn them. My parents were incredible role models and they taught me that.”

Barbara Laffey, wife of Ken and a former player who competed in Grand Slam tournaments herself, recalls Millman was independent and considerate from a young age.

“John went to a lot of junior tournaments by himself because being from a big family, his parents couldn’t always go to every tournament with him,” she said.

“I think that has stood him in good stead for the tennis circuit. As a professional player you are on your own a lot of the time, which John experienced at a very young age. He has always been dedicated and wanted to do well.”

Millman, who was named one of four finalists in the peer-voted ATP Tour’s Stefan Edberg Sportsmanship Award in 2020, has gone on to reach stunning heights.

He contested his first Australian Open as a 19-year-old in 2009, making the second round in qualifying as a No.561-ranked wildcard.

Millman had to wait four years to make his Grand Slam main draw debut, doing so as a No.184-ranked wildcard at Australian Open 2013.

Millman has displayed remarkable resilience in his career too, overcoming several serious injury setbacks. Such perseverance has been rewarded, with Millman winning his first ATP title in November 2020.

His best Grand Slam result to date is a US Open quarterfinal run in 2018, where he sensationally defeated world No.2 Roger Federer in the fourth round. It was Millman’s career-first top-10 win.

As he chases Grand Slam glory, repaying his family, friends, coaches and fans who have supported him throughout his career remains one of the 31-year-old’s major motivations.

“Whenever I step on the court, I just want to really give them something to cheer about,” says the world No.38.