Australia’s Nick Kyrgios has learnt many lessons already in his career, which started when he first picked up a racquet as a four-year-old in Canberra. 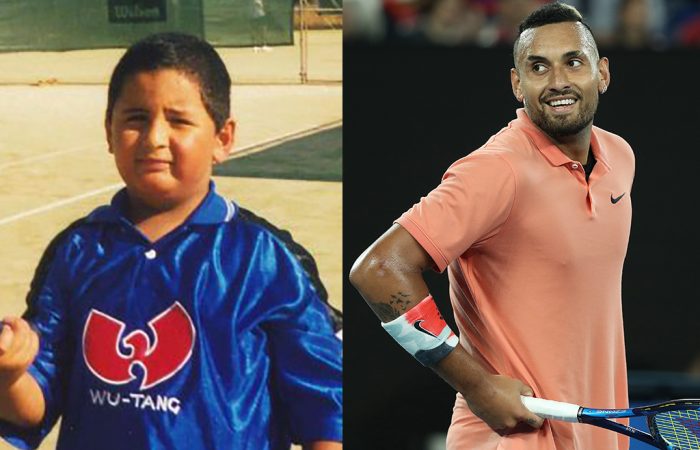 Nick Kyrgios once said: “Sport matters because it is the greatest school of lessons, teachers, and perseverance.”

That’s certainly proved true in his career so far, which began in his home town of Canberra more than two decades ago.

“He was a small, chubby and energetic kid,” recalled Bulley.

Kyrgios’ older siblings, Christos and Halimah, were taking lessons with Bulley at the National Sports Club in Lyneham. Keen to follow in their footsteps, Nick began group lessons when he was four.

“Nick just wanted to keep up with his older brother,” Bulley said.

“He was hitting a lot with his older brother and sister between lessons, so he quickly became too good for the group situation. George (his father) progressed him into doing private lessons when he was about six years old.”

By the time he was eight, Kyrgios was participating in two private lessons a week as well as a squad training session on the synthetic grass courts in Lyneham.

“He was always a little bit better than his peers, so he often played up against some of the older boys. He got on well with kids older than him,” Bulley recalled.

“(But) he wasn’t anything super special when he was younger. By the time he was 11 or 12, he was getting good results in all the tournaments. He really took off when he started to grow. By 14 he’d had a growth spurt, and he all of a sudden became a different prospect when his serve was coming from that height.”

Kyrgios’ serve is now considered one of the best in the world.

“I’ve got vision of him serving when he was eight, 10, 12 and he always had the basic ingredients there. Just now he’s got a bigger range of movement in his shoulder and forearm, a lot more power coming up through his hips and from the ground. It’s the same serve – just super charged with a lot of body and height.

“His serve is what sets him apart now and his mind too, he’s got a very good mind for tennis.”

Bulley explained that Kyrgios’ on-court creativity, even as a kid, tested him as a coach.

“We would hardly do any feeding out of a basket, it always had to be a live ball or based around some sort of scoring system. As a coach, it made you think ‘how are we going to score this game to get the outcome we are after?’. That’s the way that I normally coach, but with Nick it was really important you never did anything that was too monotonous or repetitive. You couldn’t do something you’d done the previous session,” he said.

“One of the big standouts when I was coaching Nick privately was whatever situation we set up to try and emphasise a particular technique or tactic, he would really quickly work out two or three different ways to go about winning a point.

“You’d have to tell him to limit his drop shots to 10 or so per session too, because he’d always be hitting drop shots. That was a big difference between him and a lot of the kids, who would just come and do what you say. But Nick would always be experimenting – which you can see when he plays, he has always got four or five options ready to go.”

Kyrgios went on to become a world No.1 junior and won the Australian Open boys’ singles title as a 17-year-old in 2013. He also claimed three Grand Slam junior doubles crowns.

He made a stunning Grand Slam breakthrough as a No.144-ranked wildcard at Wimbledon in 2014, reaching the quarterfinals on debut. He remarkably saved nine match points to defeat No.13-seeded Frenchman Richard Gasquet in the second round, then became the first player outside the top 100 to defeat a world No.1 at a major in two decades with his fourth-round victory over Rafael Nadal.

Kyrgios has now competed in 25 Grand Slam tournaments. This includes seven Australian Open appearances, where his best result is a quarterfinal run in 2015. He has also finished the past six seasons ranked inside the world’s top 50, setting a career-high of No.13 in 2016.

When in Canberra, Kyrgios still trains at the venue when he first learned to play. The redeveloped Canberra Tennis Centre now features hard courts as well as ‘Nanna’s Hut’ – a crowd shade structure named in honour of Kyrgios’ grandmother, Julianah Foster, who passed away in 2014.

“Before I was pro, we used to hang out here and (Nanna) used to watch me train,” says Kyrgios, who donated $10,000 for its construction.

Bulley still has a close bond with the world No.47 and strings his racquets whenever he is in Canberra.

“I’ve seen a lot of him this past year, which has been good,” said Bulley, who coached Kyrgios until he was 14.

Kyrgios chose not to travel internationally after March last year due to the COVID-19 pandemic. He spent his time in Canberra instead, where he often hit with Luke Sarris – a promising 19-year-old that Bulley now coaches.

Kyrgios still loves engaging with his local community – which is, according to Bulley, a fine example of how success has not changed him. Last year, he even committed to funding coaching sessions for youth in the Gungahlin region.

“He’s got very few airs and graces about him. He’s just the same guy,” Bulley noted.

For his childhood coach, watching his former charge now compete on the world stage is ‘satisfying’.

“It’s really great that he’s gone on and stuck with it,” Bulley said. “It’s frustrating at times. (But) I get a buzz out of seeing him play any match – whether it’s at a Grand Slam or an ATP 250 tournament. I just like seeing him out there and competing at the highest level.”

“It would be great for him and for tennis in Australia,” Bulley said.

“And if he wins a Grand Slam, it means he’s been putting the work in. That for me, would be the most pleasing part. I’d like to see him realise his potential.”