There were tennis and life lessons when a young Ash Barty started her tennis journey at the West Brisbane Tennis Centre, providing the perfect foundation for her Grand Slam-winning career. 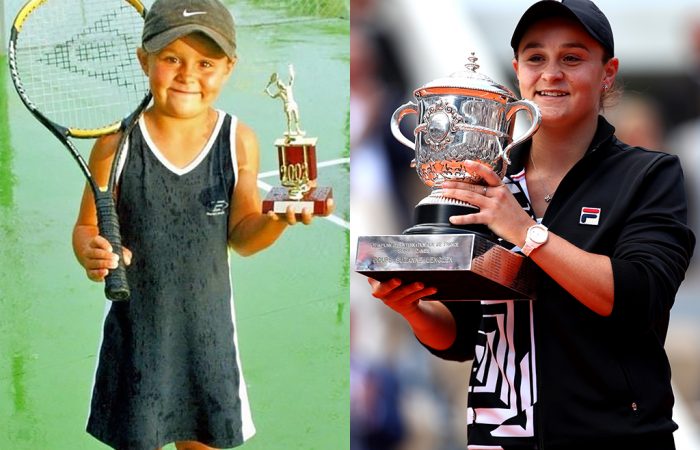 When a young Ash Barty posed with one of her very first trophies at the West Brisbane Tennis Centre, few could have imagined the significance that photo would eventually hold.

Reproduced countless times as Barty went on to become a Grand Slam champion and the world No.1 player, the image both highlighted the young Queenslander’s talent and captured her joy for the sport.

The trophies, of course, have grown in significance since that 2002 day. But perhaps more powerfully, there is much about the now 24-year-old Barty that remains the same.

Parents Rob and Josie, as well as her first coach Jim Joyce, recall the fierce determination that first brought a four-year-old Ash to those Brisbane courts.

Older sisters Ali and Sara were netballers and while nobody else in the family played tennis, the youngest Barty was happiest with a racquet in her hand.

“My very first memory was asking Mum and Dad to play,” recalled Barty, who would hit for hours against the garage wall of the family’s Ipswich home.

The much-loved Australian related the story of her first tennis lesson with Joyce in a special for the WTA.

“I think it was about a week or 10 days until I turned five years old. It was a Saturday morning lesson. It would have been an 8 o’clock or 8.30 lesson,” she said.

“I remember that he tried to turn us away because I was too young … I was shattered. All I wanted to do was play tennis.”

But while Joyce typically only worked with players who were at least eight years old, he spotted something special in Barty that day.

“I still remember that day. I really do. The big thing that stood out with Ash was obviously her hand-eye co-ordination. It was as good as I’ve seen in all the years that I’ve been coaching,” said Joyce, who has been guiding young players for more than 40 years.

“I’ve never seen a kid more keen to turn up. It wouldn’t matter if there was a big thunderstorm and the courts were all wet. Ash wanted to go down to those tennis courts.”

While channelling that enthusiasm and rare natural ability into some stunning early milestones – Barty famously becoming the Wimbledon girls’ champion at age 15 in 2011 – Joyce’s most important lessons weren’t of the technical kind.

Her father, Rob, provided insights at a session for parents of juniors competing in the 2019 December Showdown.

“Jim’s got four rules for Ash and they stand right up until today,” he explained.

“And the fourth one was that if you can play tennis after that, it’s an added bonus.”

The many accolades that have accompanied Barty’s tennis milestones underline how successfully those rules were instilled.

Barty was honoured with the coveted “The Don” at the Australian Sports Awards in 2019 and named Young Australian of the Year in 2020.

They were among many awards after the transformative 2019 season, when Barty achieved her Grand Slam breakthrough at Roland Garros and soon peaked at world No.1.

A winner of 18 professional titles across singles and doubles, the popular competitor has now lifted trophies all around the world.

But with her profile on a global stage stronger than ever, so too is Barty’s connection to her start in the sport.

The popular local has returned often to those Brisbane courts, even guiding juniors at various points through her career.

Barty keeps in regular contact with Joyce while travelling internationally and still benefits from his sage advice.

“There are still drills that I used to do with Jim when I was six, seven, eight years old that I’ll go out and do on a back court now,” she said.

A reminder that grassroots and Grand Slams will forever be entwined for Barty. And a true champion never forgets where it all began.