Australia to face Spain and Greece at ATP Cup

The groups for the ATP Cup have been drawn for 2021 - and Team Australia has been pitted against Spain and Greece in Group B. 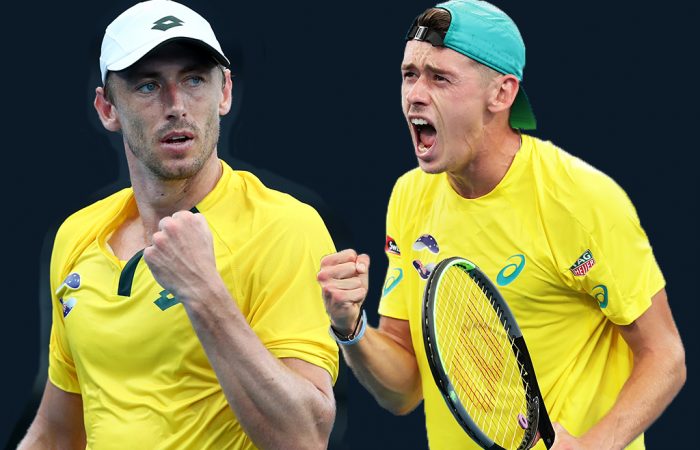 Team Australia has been handed a tough draw at the ATP Cup.

John Millman and Alex de Minaur spearhead the Australian team, which will face Spain and Greece in the round-robin stages.

The official ATP Cup draw, which was conducted today in Melbourne with Australian greats Todd Woodbridge, Mark Philippoussis and John Fitzgerald, set up an early rematch of last year’s semifinal showdown between Australia and Spain.

“My fondest and proudest memories on the court have been playing for my country and being a part of a team,” said Philippoussis. “I’m excited to watch this ATP Cup. There will be fireworks ahead, I’m sure.”

Team Australia memorably advanced to the semifinals in the inaugural ATP Cup last summer, scoring wins against Greece, Germany and Canada in the group stages in Brisbane and then defeating Great Britain in a nail-biting quarterfinal in Sydney.

In the semifinals, De Minaur pushed world No.1 Nadal to three sets in a high-quality encounter.

De Minaur, Millman and John Peers all return for Team Australia in 2021, joined by world No.37 doubles player Luke Saville.

Former world No.1 Lleyton Hewitt is captain for the second year in a row. De Minaur, as Australia’s top-ranked player, selected Hewitt as Team Australia’s captain.

Eleven nations qualified directly for this year’s ATP Cup, which will be played at Melbourne Park in the week before the Australian Open. As host nation, Team Australia is a wildcard entry.

The 12 nations have been split into four groups, with the winners of each group to advance to knock-out semifinals.

ATP Cup 2021 tickets and match schedules will be available at a later date.