From the clubhouse: Everyone is welcome at Elsternwick

While facilitating participation opportunities for thousands of players each year, the Elsternwick Park Tennis Centre is also helping to foster some powerful community connections. 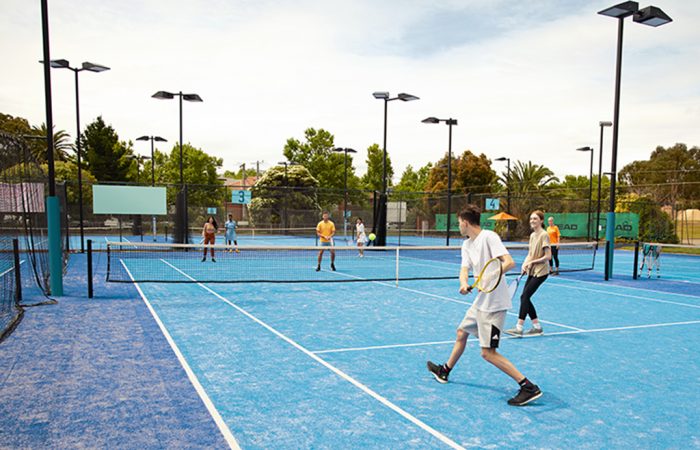 “They’re the Aussie colours,” says Garnham. “And of course, the colours of the Australian Open. Blue seems to be the new colour for tennis.”

It’s not the only thing that’s so proudly Australian about the eight-court facility, which is located in bayside Brighton in southern Melbourne.

There’s an “everyone is welcome” philosophy at Elsternwick Park, which provides a range of casual and structured opportunities to play tennis.

“Mat and I have been running the centre for two years now, and our goal is that even though it’s not a tennis club, it’s a public centre, we still want it to have that community club feel,” Barton explains.

That welcome extends to Garnham and Barton themselves, who arrived at the centre via their native New Zealand and United Kingdom.

With extensive backgrounds in coaching, the directors each appreciated that Elsternwick Park – which was named was named Most Outstanding Tennis Community at the Australian Tennis Awards in 2012 – offered a successful foundation for development.

“EPTC has been a successful club for some years now, however we want to continue to grow the centre and make it the best it can be,” notes Garnham.

Barton adds that there are many rewards in the vibrant working environment. “Since I started it’s been incredibly busy,” he explains. “It’s a great place to play tennis and coach at. We are very lucky.”

So too are the many participants who take to the Elsternwick Park courts – whether that be for formal competition, coaching sessions (offered to both adults and juniors) or experiencing one of the many casual play options available.

One of the most successful programs is Cardio Tennis, which not only represents around 25 per cent of the club’s overall tennis offerings, but also taps into the club’s community-focused philosophy.

“It was great having many players stick around with the coaches for a barbecue after their class.”

> From the Clubhouse: Strength in numbers at Gosford

The social side of the sport is clearly a priority at Elsternwick Park, which boasts a recently refurbished outdoor barbecue area and fully licensed indoor space. As Barton points out, it creates a perfect environment for building connections alongside tennis experiences.

“It’s somewhere to build up friendships as well. A lot of people come here not to just play tennis but also to make friends. They create their own little groups, they play tennis with each other, stay for a drink or coffee or whatever it is,” he says.

“Outside of that as well they continue their friendship, which is what we wanted to have – a big community feel of people coming here and getting along on and off the court.”

Tapping into the playful nature of tennis contributes to some solid rates of retention, with some participants even travelling from distant suburbs to play at Elsternwick.

“Cardio Triples”, where Cardio Tennis sessions are conducted for 20 teams of three participants each, is especially popular.

“It’s huge. It’s got to the point where people are asking when the next Triples event is on,”says Garnham of the themed events, which are typically conducted on a Saturday evening.

“Each event is themed where teams can be colours, or a superhero, or have a cultural focus where they pick a country and dress up representing that country. Many of the coaches get involved and we have awards at the end of the night – like best-dressed, most dedicated and things like that. It’s a lot of fun.”

Underpinning the playful approach is a clear focus on professionalism, with 24 full-time staff including eight coaches (and several more employed casually), a receptionist and team members who can provide childcare.

“We try and build environments for these staff as well as the clubs,” Garnham relates. “We’re all friends outside the club as well. It’s a good environment to come and play and work.”

Welcoming around 1500 players each week, there’s a strong sense Elsternwick Park has found the right balance.

And while the directors would dearly love to address an obvious need for more courts, they’ll always find a way to make new players welcome.

As Barton stresses: “Just come on down, have a look around the club and have a hit sometime.”

> From the Clubhouse: A lifelong connection