From the clubhouse: Strength in numbers at Gosford

With bustling courts and players flocking to contest UTR tournaments, the Gosford Tennis Club is showing how the game can thrive in the most difficult times. 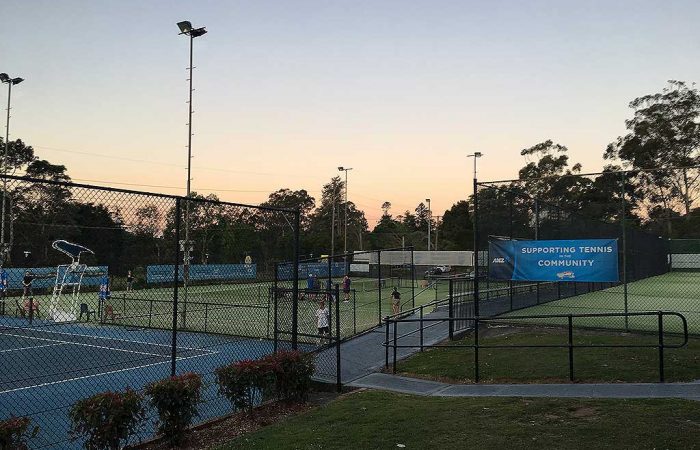 There’s a strong sense of both the past and the future at the Gosford Tennis Club.

And rising professional Max Purcell, who was runner-up in the Australian Open 2020 men’s doubles, trains at the New South Wales centre with coach Nathan Healey when he’s not travelling on tour.

But it’s an ability to focus on the present that’s arguably had the greatest impact for the prominent Central Coast club, which welcomes more than 50,000 visitors each year.

Carefully managed with the support of Tennis Australia and Tennis NSW, participation stopped for only a single day as staff at Gosford Tennis Club navigated safety measures resulting from the COVID-19 pandemic.

And when play restarted, the number of people hitting on the club’s 23 courts quickly grew.

“We were allowed to put two people on a court, and we had our online booking system,” relates Tony Haworth, who is treasurer and volunteer co-ordinator at Gosford.

“So effectively what happened is that we had this dramatic rise in court bookings. I think we were receiving over 100 court bookings a week.”

The move to host UTR tournaments provided another boost. Haworth explains that after Gosford launched the events in February, they were soon averaging around 50 matches each week.

“UTR has been a bit of a saviour for us,” said Haworth. “We were able to open up some tournaments where we could play what we call a UTR Super Series on a Saturday and a Sunday.

“We were finding we were getting a lot of players from Sydney playing, because they couldn’t go to some of the centres because they were closed. And a lot of the tennis clubs on the coast were closed because they’re run by volunteers, so UTR grew and grew.”

Connecting players globally, the Universal Tennis Rating makes every point count. We catch up with @darren_cahill to learn more about UTR. @MyUTR pic.twitter.com/a8GNFRBOZW

From a start of around 20 players contesting the UTR tournaments, participation now averages at least 80 competitors at the weekend events.

An additional staff member appointed on a part-time basis to support those events soon had his work cut out. A tournament during the long weekend in September attracted 235 players in the junior event and 115 competitors in the open division.

“And that’s all UTR driven,” Haworth notes, explaining that around 60 per cent of participants are local and many others travel approximately 50 kilometres from Sydney’s northern suburbs to compete.

“We’re even getting players from as far down as the southern part of Sydney,” he adds.

The benefits of the Universal Tennis Rating (UTR) adopted at the events – where players compete locally but count globally in a unified system that provides a rating across all ages, genders and locations – are clearly catching on.

“We identified early that people wanted to compare themselves – or they might say ‘look, I should be in division one’ when in fact they should have been in division three or something like that,” says Haworth.

The UTR is particularly beneficial for both club-level players and the club itself according to Haworth, who first became familiar with the rating system while travelling in the United States.

“It does help the club,” he points out. “For example, the feedback we’re getting from players, particularly those who play a lot of Australian Ranking tournaments, is that they’ve got to travel a lot.

“Now they can come here, they’re 40 or so minutes from Sydney and the cost is a lot less. They don’t have to spend money on accommodation.

“And our club members have taken it on board because they’re getting different people to hit against, instead of the same people.”

The busy courts at Gosford, where eight coaches are employed, also reflects a confidence in tennis as a sport that can be safely played amid the challenges created by COVID-19.

The growth in junior participants is especially notable – a recent school holiday camp saw numbers increase from a previous maximum of 23 juniors, to an average of 80 young players each day.

“It’s really encouraging and when we talk to other clubs around the coast, we’re seeing similar numbers,” says Haworth. “But we also think the adults are finding it a healthy option … it’s outdoors, you’re not in a confined space and we maintain physical distancing.”

Helped by UTR tournaments and other initiatives, the Gosford Tennis Club itself is also in good health.

The club currently has more than 1400 members and having successfully cross-promoted UTR membership, has a new goal in sight.

“We’ve got a goal of getting over 2000 members this year,” enthuses Haworth. “There’s a lot of opportunity to grow.”

Activate your UTR for free to see how you fare against players in Australia and around the world. Or if you’ve played Tennis Australia competitions or junior events, you already have a UTR – check it out at MyUTR.com.